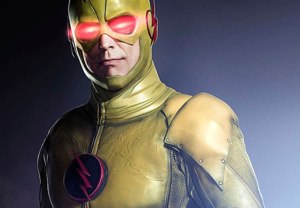 Looks can be deceiving.

On Tuesday night’s The Flash, the real Eobard Thawne (as played by The Carrie Diaries‘ Matt Letscher) was revealed during flashbacks to the night of Mama Allen’s murder. Trapped in the past, Eobard studied Dr. Wells, then took over his body to speed up the creation of the particle accelerator that would help him get back to his own time.

But what of the actual doc, who appeared to be decayed after the incident? “What happened to Harrison Wells’ real body and what really happened that night and all these things are going to start coming out,” the EP says. “What happened in [Episode] 15, not all of it went away as people are going to find out soon.”

As for the body swap twist, it’s been in the works for a while. As they were breaking Episode 13, Kreisberg and fellow EP Greg Berlanti were trying to figure out, “Why wouldn’t the blood just show them it was Wells?” Kreisberg shares. Then the idea came up of, “What if Wells wasn’t Wells? What if he stole Wells’ body?”

Once Kreisberg and Berlanti landed on the switcheroo, “We both said, ‘We should get Matt,’ who is so great at playing the villain” — he was Captain Love in The Mask of Zorro — and worked with the duo on Eli Stone, Kreisberg notes.

“They approached me earlier than you would normally be approached,” before the holidays in 2014, Letscher recalls. “I think they knew that it was going to be a big reveal and they wanted to make sure they knew who they were writing for, but also, they wanted me to be prepared and to make sure I was in the cone of silence, so to speak.”

The actor then looked at Tom Cavanagh’s performance as Wells for inspiration. “I tried to, especially in his private moments with Gideon, take a little bit of what he was doing and get that flavor into what I was doing without trying to outright copy him,” he describes.

However, if you, like this reporter, thought the Reverse-Flash’s voice doesn’t sound much like Cavanagh and wondered after the reveal if Letscher actually supplied it, the actor says he didn’t do any voiceovers for the previous episodes. (“I don’t know what they would have done in post-[production], but it wouldn’t surprise me if there was some modulation that happened to create a little bit of cognitive dissonance there when you’re watching Tom and he’s somehow not syncing up with who you think he really is,” he adds. “That would be a great way to handle it. But that’s just me speculating.”)

Donning the villain’s sleek outfit proved to be a little more challenging. “The costume was built to Tom, who is a fitter man than I,” Letscher says with a laugh. “I managed to squeeze into it. Once I was in it, this is what’s great about my job. I get to have a moment like that. You’re wearing this superhero costume in the middle of the night in Vancouver. You’re pretending to be this meta-human. … Nobody else gets to do this. It felt very special actually.”

Beyond taking on Wells’ physical identity, Letscher’s Eobard also took a little something else from Cavanagh’s character, who has often talked about his late wife. “One of the things that kind of bled through was Wells’ love for Tess that Thawne absorbed when he absorbed his body,” Kreisberg reveals, so the doc isn’t completely gone.

And neither is Letscher, who will be back this season. In fact, when the EPs filled in the actor about Eobard’s arc, “They definitely talked about the possibility of him continuing past this season,” Letscher says. “They’re still developing what that story would look like. There are so many stories you could tell with this character from the Flash anthology. He appears in so many different iterations. They have a lot to choose from, including their own story.”