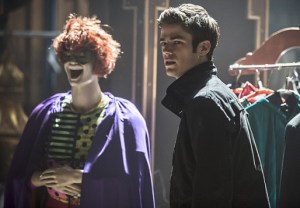 On Tuesday’s episode of The Flash (The CW, 8/7c), Star Wars icon Mark Hamill reprises his role as the colorful villain from the ’90s series, which starred John Wesley Shipp as the speedster.

A self-professed fan of the comics and the original CBS show before he even appeared on it, Hamill tuned into the CW incarnation from the very first episode. “I even thought, since they were doing Mirror Master, Weather Wizard and various other Rogues Gallery [characters], ‘I wonder if they’re going to do the Trickster,”‘ he says. When the show did eventually call to ask him if he would to do a guest spot, Hamill assumed he would be portraying “a colleague of John Wesley Shipp [who plays Henry Allen], a professor. Something age-appropriate. I’m not getting back into that one-piece jumpsuit. I said, ‘Who do they want me to play?’ When they said the Trickster, I just couldn’t believe it,” he recalls with a laugh. “I couldn’t figure out how that could be unless it’s some kind of weird time-travel episode. I was very skeptical.”

But after hopping on the phone with executive producer Andrew Kreisberg, Hamill’s concerns were alleviated. “The one thing that impressed me about the show is how smart the writing is. It’s got the fantasy element, the comic book elements, but it’s really strong in characters,” the actor says. “So I guess I shouldn’t have been surprised when they had such an ingenious idea as having [Dexter‘s] Devon Graye play a new Trickster.” 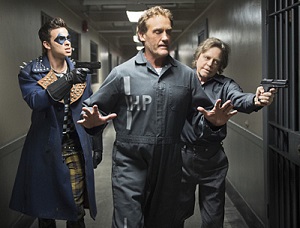 “[Devon] brought it so close to home in terms of how emotionally damaged he was,” Hamill adds. “It just moved me beyond words. As far as I’m concerned, he’s a worthy successor.”

Although there’s a new copycat baddie on the scene, Hamill’s character hasn’t lost any of his cleverness. “What was always cool about the Trickster on both series was he was smart,” Kreisberg says. “No matter how crazy he was, he was smart. He thought four steps ahead.” As a result, Team Flash “really [has] to out-think him” and Wells has to clue in Barry about “something he probably didn’t want to let him know he could do.”

Beyond Hamill, the episode is also peppered with easter eggs and callbacks to the ’90s series, from guest star Vito D’Ambrosio, who played a cop and is now the mayor of Central City, to replica props like the Trickster’s infamously flamboyant costume. Kreisberg also “knew there was no point in doing this if we didn’t have Mark and John in a scene together,” he notes. “Early on, when we were constructing the story, we said, ‘The Trickster should kidnap Henry,’ because it satisfied both the fan in all of us and getting to see the two of them act together, but also you want Barry to really care about the Trickster.'”

But times have changed — probably for the best given that Shipp’s non-breathing costume had to be hosed down weekly, per Hamill — so Tuesday’s hour is “a way in which you’ve never seen the Trickster if you have watched the old show,” the EP adds. “The challenge of this episode was it had to feel like a legitimate sequel to the old series, but also feel like an episode of our Flash. We feel like we pulled it off.”

As for whether the Trickster will return, teamed with the fellow Rogues, “that is the plan,” Kreisberg confirms, expressing his excitement at the idea of “Wentworth Miller and Mark in a scene together and watching the dichotomy of them.”