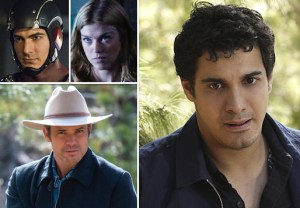 Has Scorpion cooked up a genius cliffhanger? How has S.H.I.E.L.D. “revived” Lucy Lawless? Who else on Team Arrow has a beef with Atom? Are more Justified deaths ahead? Read on for answers to those questions plus teases from other shows.

Anything on the Scorpion finale? –Stacy
Ohhh, it promises to be a doozy, coming off of some rather massive, cliff-hanging developments in the penultimate episode. Let’s just say that Walter is dealt one too many emotional blows that drive him possibly over the edge – and that isn’t necessarily just a figure of speech. That, coupled with two other twists, makes the big question entering the season finale no less than: Is Team Scorpion dunzo?! (Though I’m gonna guess the answer is no.)

On Marvel’s Agents of S.H.I.E.L.D., I was a little puzzled how May in the episode “One of Us” told Andrew they would not send Skye away, then in “Love in a Time of Hydra” she told Coulson she agreed with her ex. My question is: Do we see more development in her relationship with Skye that she considers Skye family? –Stephanie
Any concerns you might have about May’s faith in Skye should be alleviated this Tuesday, when amidst utter chaos, May makes it a priority to do whatever she can to (hopefully) save Skye from certain doom. All in all, the next episode is quite excellent, offering a fascinating series of flashbacks to when S.H.I.E.L.D. fell circa Captain America 2, thus allowing us to really see Lucy Lawless’ Isabelle Hartley (and her knife) in action. Meanwhile, in the present timeline, you’ll get the knock-down, drag-out agent-on-agent fight you perhaps never knew you wanted.

Does Elementary have any plans to revisit Kitty at some point? –Melinda
I am told that, at this time, the Kitty storyline remains… spayed.

I’m worried that last night’s Once Upon a Time was the beginning of the end for “good” Emma. Will the Author being in Storybrooke distract her from hating on her parents, or is she guaranteed to go dark dark? –Jamie
That, I reckon, is the million-dollar question as the final episodes play out. As Colin O’Donoghue reminds, “The second half of this season is about the struggles that heroes and villains each have. And what great about the show is it’s never cut and dry. It’s never as easy as a villain is a straight villain or the heroes are pure heroes. They’ve all done something that they regret, but learn from it in a positive way.” As for the Savior specifically, Hook’s portrayer says, “We’ve seen moments where you could see where Emma could maybe become darker. Whether or not she does is a whole other thing.”

Two weeks in, I must ask: Will iZombie’s Robert Buckley get more to do than stand around looking beautiful? –Ellie
Rest assured, Liv’s ex-fiance has some Major drama in his not-too-distant future. “He very quickly gets his own storyline,” executive producer Rob Thomas tells us. “He works at a home for runaway teenagers [as] a social worker, and those teenagers start going missing off the streets of Seattle. As he looks into that, he stumbles into a zombie universe.”

Is someone dying in the “Broken Arrow” episode of Arrow? If so, any clues? –Kyle
Ah yes, the infamous “65th episode” that both Stephen Amell and Colton Haynes tweetbooked ominous/sad things about. Since then, Haynes has clarified, “I don’t think it’s as serious as everyone took it. It was just a very emotional scene” that he was commenting on. Meaning, there might (might) not be any signfiicant deaths. “We will be saying goodbye to people,” Haynes allows, “but I think it was just kind of blown out of proportion.”

Can you give me something on Arrow‘s Diggle? –Sofia
Though Suicide Squad business prevented him from having a chance to chime in, rest assured that, like Oliver, Dig has something to say about Ray’s super-suited alter ego. “He has some not-so-weak opinions,” David Ramsey says with a laugh. “He doesn’t have a problem with Ray, who is compelled by something, a higher purpose, that Diggle as a person tunes into. But Ray’s not trained, and a part of the criticism he has for Ray is the same one he has for Laurel Lance as Black Canary. Because while it’s honorable what compells Laurel, Diggle feels that, like Atom, she needs to be better trained before she can be super-effective in Starling City.”

This entire season of Arrow feels completely off, in my opinion. Never in my TV-watching life have I yelled (and not in good way) “What the f—?” as many times as I have throughout this season. My question is, do you feel the same? –Amanda
I would say that Season 3 doesn’t so much feel “off” as “too soon” – meaning, bringing on the mighty Ra’s al Ghul is more of a Season 4 or 5 move, especially since it necessitated the permanent (?) removal of Sara from the playing field. (Then again, Sara’s death was also needed as a catalyst to push Laurel into Canary mode, which some would argue was becoming conspicuously overdue.) My other quibble with the Ra’s “offer” – and I’ve stated this elsewhere — is that it asks us to believe that no one already in the League is a more worthy successor than the guy their boss dispatched with in a matter of minutes. Also, I feel like Oliver and Felicity’s talks about feelings are getting a bit repetitive. All that said, I’ve greatly enjoyed Thea’s much-needed development this season. And I have great hopes for Season 4, based on what David Ramsey teased in our Q&A.

Do you know if Nick Jonas being on Scream Queens will impact his role on Kingdom (which I think is filming Season 2 already)? Is he doing both? –Sonja
Fear not, I am assured that Jonas remains a series regular on DirecTV’s dysfunctional family-slash-MMA drama.

The Justified series finale is coming up so fast and I’ve heard next to nothing from about what to expect. How many deaths are we looking at? Will there be any happy endings for anyone? –Fran
I know at least three characters who are guaranteed not to die in the April 14 series finale… because their lives will have already been cut short this Tuesday night. (“Fun” fact: Some of said death comes out a brawl so brutal and extended that when the 911 dispatcher asks the nature of the emergency, the caller can only admit, “I don’t know where to start….”)

What happened to Marry Me and About a Boy? Are they ever coming back to NBC’s schedule? –Kasey
With both Undateable and One Big Happy still faring well in Tuesday’s 9 o’clock hour, no returns dates have yet been set for either show.

What is the latest on The Mysteries of Laura? –Judy
Regardless of its renewal status at the time, the NBC freshman will go out with a literal bang, when in the season finale a case hits a little too close to home for Laura– because Jake suffers a gunshot to the chest.

Anything on Bates Motel? —Monica
Norma’s house currently has three residents: Norma herself, Norman and Dylan. By the end of next week’s episode, that number will decrease to two when someone — and perhaps not the obvious someone — moves out. And this person does not go quietly.