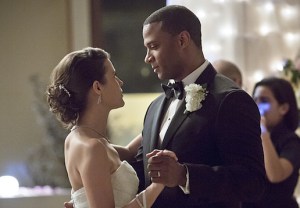 This Wednesday on Arrow (The CW, 8/7c), John Diggle and Lyla Michaels are heading for a wedding… followed by one hell of a honeymoon, when A.R.G.U.S. business requires the newlyweds to accompany the Suicide Squad on a deadly, not-so-romantic op.

TVLine spoke with David Ramsey about the un-Arrow-like nuptials, his “greed” for fight scenes and the ominous threats posed by Ra’s al Ghul and, eventually, the H.I.V.E. organization.

TVLINE | What does a wedding look like on the intense, gray, brooding superhero show known as Arrow?
I know, right? You know something — it looks anything but that, which is a great change for Arrow. It’s not brooding, it’s not dark. It’s actually bright, with color. Can you believe it? It’s a lot of fun, and we have a hint of Flash levity. But as you said, it is Arrow, so we can’t stay there for too long, can we?

TVLINE | So, what happens? The wrong color flowers get delivered, the violinist is late…? What sort of drama is on tap?
Deadshot, Floyd Lawton (played by Michael Rowe), shows up, and with him comes the Suicide Squad. And with that comes A.R.G.U.S. So, yeah, they have something to say about our honeymoon plans.

TVLINE | What does Cupid (Amy Gumenick) bring to the Suicide Squad? Has she acclimated well? 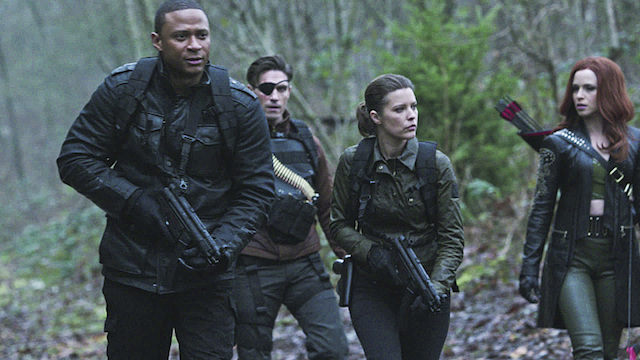 She acclimated well because she’s worked with A.R.G.U.S. and she knows her duties — and she like every one else has a couple of explosives planted in her spine. So there’s that! But she brings all of her questionable wit and questionable sanity to the table. We learn a little bit more about her. And we learn a lot about Floyd Lawton in this episode. The show has increasingly evolved Floyd Lawton from the sort of cardboard one-dimensional assassin that he first was to a more well-rounded, understanding of who he is and what makes him tick. So you’re going to find out a lot more about him this episode.

TVLINE | Fans seem to really enjoy Deadshot.
They do, they do. He’s a great character. You’ll learn why he does what he does, what made him who he became. And I think part of that is what Diggle has tuned into, what allows him to see the humanity of Floyd Lawton. Diggle in general is that kind of guy, one who sees the silver lining. Even thought I wouldn’t say he’s friends with Floyd Lawton, he certainly has learned to respect him.

TVLINE | In this latest Suicide Squad adventure, were there any action hero “firsts” for David Ramsey?
Well, it’s not a first, but any time they let me do my fights on-screen is always great. Diggle doesn’t get to fight enough — hashtag #LetDiggleFight, let’s do that. [Chuckles] I would love more of that. It’s an action show and Diggle is Special Forces, a four-tour veteran of Afghanistan…. This guy is the real deal. So there are no “firsts,” but there are some awesome fight scenes.

TVLINE | Is that important to you, getting to mix it up every few episodes? To remind us what a badass Diggle can be, instead of just running the comms?
I don’t mind running the comms; I think you’ve seen Diggle’s talent at that. [Laughs] So I don’t know if it’s “important” to me. Like any other show, these characters are fleshed out through time. You see these things and then they kind of fall away, to build other characters up, and then you see them again… It’s kind of a see-saw, and you like that as an actor. Listen, I’m a little greedy for action scenes. I’m a martial artist and any time I get to show off some of that art is great. I don’t know if I need it every other episode, but it’s always fun to do — and there’s always room for more. 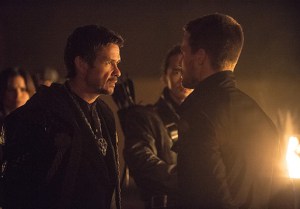 accounts, Episode 19, “Broken Arrow,” sounds pretty heavy….
Yes. Listen, from, really, [Episodes] 16, 17 on, to 23 [the season finale], it’s just ramping up. Ra’s al Ghul is no joke. And he’s going to get what he wants from Oliver one way or another. One way or another it’s going to happen. And speaking of Lyla and Diggle, they’re going to be affected in a very serious way by Ra’s al Ghul, because no one is off limits to him getting what he wants. In an upcoming episode, they will be touched in a personal way.

TVLINE | Are we going to get any new H.I.V.E. goodness during the remainder of this season?
That’s a great question — and H.I.V.E. is a part of the Big Baddie next season, so expect H.I.V.E, like Ra’s al Ghul, to affect the whole team. We’re going to get into why they hired Deadshot to kill [Diggle’s brother] Andy, who they are, what they do…. H.I.V.E. thus far has been quiet, kind of set back. [The writers] kind of planted them in a place last season or the season before that, and Diggle hasn’t really talked about them much, but H.I.V.E. is something very, very serious. They’re going to present big-time difficulties for Team Arrow.