In case you’re not already terrified of the inevitable robot rebellion, AMC’s Humans is here to supply your healthy dose of fear.

The network on Sunday debuted the first official teaser for its summer drama, in which Synths — eerily lifelike robot servants — become a must-have for every American household. But in the case of one suburban family, purchasing a refurbished Synth proves to have “chilling” consequences.

The teaser above introduces us to a synth named Anita (played by Gemma Chan).

* When The Fosters actor Gavin MacIntosh (“Jude”) discovered that YouTube had age-restricted a clip of Connor and Jude’s long-awaited kiss, he went on a Twitter rampage until the restriction was lifted. “When it’s brought to our attention that a video or channel was age-gated incorrectly, we act quickly to fix it,” YouTube said in a statement Monday.

* Rapper Ludacris and supermodel Chrissy Teigen will host the 2015 Billboard Music Awards, airing Sunday, May 17 at 8/7c on ABC. Finalists for the awards will be announced Tuesday, April 7 on Good Morning America.

* Julie Andrews is developing an animated show based on her children’s book series The Very Fairy Princess, according to The Hollywood Reporter. The show, premiering in 2016, will follow a young girl named Geraldine who believes herself to be a fairy princess.

* Nick Jonas has been added to the list of performers at the 2015 Radio Disney Music Awards, airing Sunday, April 26 on Disney Channel. 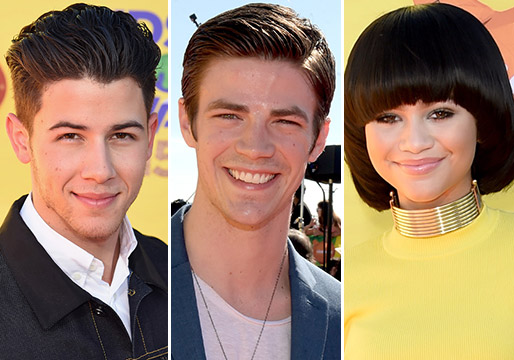