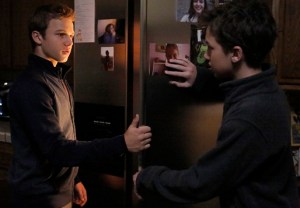 If you want to see TV history being made, look no further than ABC Family’s The Fosters, which recently featured two 13-year-old boys locking lips.

The momentous kiss between Jude and his pal Connor, which was seasons in the making, kicks off the young Foster’s journey of self-discovery about his preferences.

And what —or more precisely, who — he likes could be in jeopardy after the sounds of a gunshot closed out last week’s hour, Byerly teases below.

TVLINE | After that very dramatic cliffhanger, where does the action pick up on Monday?
[The last episode] ended with the kids running out of the house and a gunshot and then Stef and Lena being called. So it picks back up with what actually happened, who got shot [and] who’s going to be affected by this.

TVLINE | The promo strongly hints that it’s Connor who got hurt. How serious is the situation?
I would say that it’s not life-threatening, but it is dangerous.

TVLINE | How is Jude dealing with the fallout?
Jude is very scared. He’s also scared of what Connor’s dad is going to do. As we’ve seen, Connor’s dad has been against their friendship and their growing relationship. He’s scared about what will happen and the repercussions of going out and doing something like this.

TVLINE | Jude’s been holding a lot in. He hasn’t really talked to anybody about his feelings for Connor. Does he get to unload a little bit?
Yeah, we get to see Jude talk about it a little bit with some of his family members. He loves his sister and trusts her. He’s grown a very close relationship with Lena and Stef and everyone in the Foster family. He does get to tell people a little bit more.

TVLINE | What’s the dynamic like between Jude and Callie like going forward? They’ve been through a lot recently between her wanting to live with Robert and Jude learning to stand up for himself.
It hasn’t been every scene the two of them together, so it’s interesting. It’s a little different to see. They’re always going to be very close and love each other very much. We will see more of them together towards the end of the season and as Callie’s storyline with who she’s going to live with resolves. 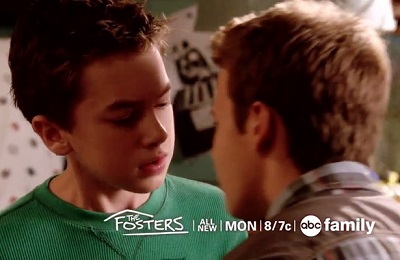 TVLINE | They’ve been hinting at the storyline between Jude and Connor for a while. What kind of conversations did you have with the producers and with [co-star] Gavin Macintosh going into the episode where they kiss?
Since the beginning of Season 2, we always talked about if Gavin and I were comfortable going down this path with our characters, having them go down the path of being homosexual. It was kind of hard for us to handle at first because we’re both straight men and we’re also best friends. It was a little awkward to kiss someone who is also straight and also your best friend. So it took us a little bit of time to get a good grip on ourselves. The writers/producers wanted us to really understand ourselves and our own sexuality and own own sexual preference before they just threw us into finding out another character’s. So they were very concerned how we felt before they would just throw us into these roles.

TVLINE | I don’t think I’ve ever seen characters as young as these exploring their sexuality on TV before. Was there a sense on set that you were doing something historic and important?
Oh yeah, Peter [Paige], one of the creators of show, was constantly talking about that. It’s considered the youngest same-sex kiss on national television. He was so excited and proud of us for going down this path and letting them play with it and show different people around the world these characters. It was a really, really cool experience. I’m very glad that I got to be a part of this.