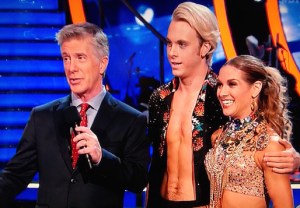 Dancing With the Stars isn’t messing around in its 20th season.

Just 14 days into the competition, the ABC reality series selected Latin Night for its weekly theme, saddling the contestants (who are still just getting adjusted to this whole spectacle) with rumbas, salsas, paso dobles, cha-chas and Argentine tangos — some of the most difficult styles that dance has to offer.

So, which pairs sizzled in this particularly challenging week — and which ones fizzled out? Before we go over the results, here are the highlights from Monday’s installment:

PHOTOS Dancing With the Stars: We Ranked the 20 Casts, From Worst to Best!

DANCE OF THE NIGHT | Riker Lynch and pro Allison Holker (Salsa): Nastia and Derek gave this pair a run for their money — quite literally, as both teams received a score of 34 from the judges — but Riker and Allison brought an infectious joy to the dance floor that wasn’t matched by any other competitors. Although Riker didn’t seem fully confident in the lifts placed at the very beginning of his salsa with Allison, the rest of the routine was nonstop fun — and technically on point, to boot.

MOST IMPROVED | Chris Soules and pro Witney Carson (Argentine Tango): Was Chris going to find himself at the top of the judges’ scoreboard after his routine with Witney? No. Did Witney still do most of the (literal) legwork in their complex number? Yes. Still, Chris’ commitment to improving, his fiery chemistry with Witney and his abandonment of the “Prince Farming” persona in favor of something much sexier combined to reveal heretofore unseen potential.

MOST DISTRACTING COSTUMING | Suzanne Somers and pro Tony Dovolani (Samba): Although Tony didn’t know what Carrie Ann Inaba meant when she asked him to bring more “depth” to future routines with Suzanne — leading to Tony’s mega-awkward declaration that the judges “aren’t on [his] side” — the judge furthest to the left (of the table) hit the nail on the head with her critique. The duo’s Jazzercise outfits in Week 1 were cute and fairly unobtrusive, but Suzanne’s enormous dress and fruit hat in Monday’s samba were not only distracting, but limiting. Tony may not have a clue how to go deeper, emotionally, with his partner — but here’s hoping he figures it out.

WORST OF THE NIGHT | Patti LaBelle and pro Artem Chigvintsev (Cha-Cha): It’s fun to watch Patti shake her groove thang while surrounded by a group of hot dancers…. for a while. Then, it just gets old. Such was the case in Monday’s cha-cha, when Patti forewent actual choreography in favor of shimmying on a luggage rack for most of her routine (which, I realize, is as much Artem’s fault as it is the R&B legend’s). Miss Patti is always a joy to watch, but when there’s no actual dancing going on in her portion of Dancing With the Stars, it all seems a bit pointless.

OK, your turn. Were you surprised to see Charlotte and Keo eliminated? Who delivered your favorite dance of the night? Hit the comments!