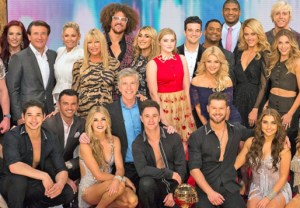 As Dancing With the Stars host Tom Bergeron has taken great pride in reminding us, the reality competition is currently celebrating its 10th anniversary. (Anyone opposed to making a drinking game out of Bergeron’s memos? It would make Monday nights so much more fun.)

To mark the ABC series’ major milestone, we’re looking back at the 20 seasons under its sequined belt so far — and, more specifically, the celebrities/”celebrities” that have salsa’d into our living rooms for the last 10 years.

Which casts were the most stacked with talent? Which featured the highest number of A-list (or, let’s face it, B-list) stars? Which Dancing rosters had us Googling the stars’ names just to find out what makes them (allegedly) famous?

The photo gallery below (which you can also view here) contains our ranking of Dancing With the Stars‘ 20 casts to date, listed from worst to best — taking into account the amount of star power and actual dancing prowess the celebs had that year. Click through the gallery to see our picks, then tell us: Which Dancing seasons have been the most memorable for you?