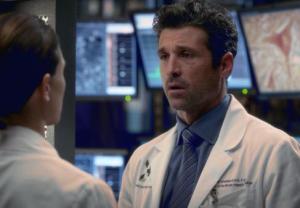 In this week’s Grey’s Anatomy, Derek told Meredith (not quite all) about “the other woman,” Owen’s mother (reluctantly) came clean about her secret romance, and Jo treated a patient whose nose was home, sweet home to a…

On second thought, keep reading. I’ll tell you in due time.

DOCTOR, HEEL, THYSELF? | Picking up right where “Don’t Dream It’s Over” left off, “With or Without You” began with Derek at his own doorstep, eager to tell Mer that the woman who answered his phone was just his research fellow, Renee. Though he tried to play it off like it was no big deal, Mer pointed out that it looked like he’d raced back to Seattle because he thought he was in trouble. No, he countered, “I came home because we’re in trouble.” And he wanted to work on it. Her? Not so much. When she refused to get someone to cover her shift, we flashed to an early Derek/Renee encounter – professional but with enough sparks flying to raise eyebrows. (Subsequent peeks at the colleagues’ interaction revealed a dangerously deepening connection, complete with a stolen kiss.)

At the hospital, Mer distracted herself by pushing Alex – hard – to let her perform a risky surgery on a teenager awaiting a liver transplant that he might not live long enough to get. Since the patient was sick of feeling like crap, he voted to undergo the procedure. Sadly, this was the moment that Mer’s streak came to an end. Though she blamed Alex for second-guessing her, he knew that she was really mad at Derek, not him, and responded by hugging her.

That night, after Derek flashed back to pushing Renee away – right before Mer’s infamous phone call – he told his wife, “I thought D.C. was everything, and I was wrong. You… you’re everything.” That being the case, he can’t live without her. In response, she said, “I can live without you… but I don’t want to.” So hallelujah, MerDer is saved! (Apparently, next week they’ll resume being co-workers at Grey Sloan as well.)

COUGAR TOWN | No sooner had Owen and Amelia made a date to finish what they’d started than he discovered that his mother, Evelyn, had had a dizzy spell, fallen in the shower and wound up in the ER – accompanied by John, her much, MUCH younger policeman boyfriend of half a year! (Cue Owen hitting the roof in 3, 2… ) While getting an MRI, Mama Hunt admitted to Amelia that she knew how unlikely a couple she and John were. The idea of them being together was so crazy, in fact, that “it was weeks before I even realized he was dating me.” But, she added, when they kissed, they were exactly the same age. (So a little “aw” mixed with the “ew.”) After Owen calmed down, his mom explained to him that she’d met her beau at a writers group. Unfortunately, the conversation turned ugly fast. As soon as the subject of sex came up, Owen crushed Evelyn by making it clear that he didn’t think a man as young as John could love her. “I don’t wanna see anyone make a fool out of you,” he argued. Afterward, she was breaking up with John when she went into shock. Ironically, that was what brought Owen around to the possibility that their relationship might be the real deal: Even if Evelyn didn’t want to be with him, John refused to leave until he knew she was okay. And not only did she survive her aneurysm, Owen reunited her with John. The doc’s reward? At the end of the hour, he and Amelia finally sealed the deal.

OH NOSE YOU DIDN’T | While Stephanie ran around the hospital desperately trying to log hours on cool cases – she even attempted to bribe Ben to let her take his place when Jackson operated on a man with an ear on his arm – Jo hit the mother lode: a woman suffering from nosebleeds that turned out to be a leech up her nostril! Needless to say, Steph turned (hilariously) green with envy.

OK, your turn. What did you think of the episode? Are you relieved that MerDer pulled through? Hit the comments!