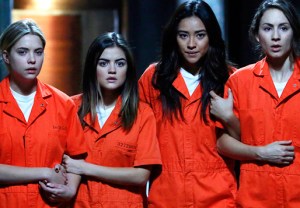 Pretty Little Liars cordially invited fans to “A”‘s house on Tuesday’s season finale for a long-awaited — and, let’s be honest, long-overdue — reveal. But did the end result live up to the hype?

As teased in the final moments of last week’s episode, “A” redirected the girls’ police van to its/their freaky, life-sized dollhouse, including replicas of their own bedrooms, where it/they made the girls act out all kinds of bizarre scenarios — like sipping tea and playing board games to decide their dream prom date. (Duh! Caleb, always.)

So, without further ado, here are the six biggest twists, surprises and twisted surprises from Tuesday’s Season 5 finale:

* First of all, Mona is alive — only she refuses to answer to that name. “I’m Alison DiLaurentis,” she insisted when addressed otherwise. Unsurprisingly, “A” forced her to take on Ali’s identity.

* Spencer’s parents are now fully aware of the “A” situation, thanks to a debriefing from Alison. (It’s about damn time!)

* The blocks in Spencer’s “playroom” spelled out “Charles,” the identity of “A”!

* Andrew was seen eavesdropping on the Hastings’ phone call with Melissa, solidifying his position as a total creeper.

* An old family video reveals that Jason has a twin! (A twin named Charles, perhaps?)

Andy’s official theory: What we know for sure is that “Charles” took over for Mona when she was locked up in Radley. We also know that Alison had two older brothers. My hunch is that Jason’s twin — Charles — is fraternal, and might just be the man we know as Andrew Campbell. Am I crazy?

All right, PLL fans, it’s time to freak out in unison: Were you satisfied with the “Big ‘A’ Reveal”? Grade the episode, then drop a comment with your thoughts and theories below.