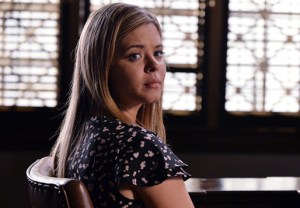 On Pretty Little Liars, nothing is as innocent as it seems. A bright yellow school bus is really something to be thrown under, and a quaint children’s playground is apparently the perfect hideout for a drugged-up teen.

People on PLL also tend to be not-so-innocent — just ask the jury that found Alison DiLaurentis guilty of murder on Tuesday’s episode. Of course, she’s not going to the Big House all by her lonesome; immediately after the reading of Ali’s verdict, Detective Tanner and the police arrived to arrest Aria, Emily and Spencer!

Ali’s lawyer alleged that her arm wasn’t strong enough to hurl Mona across the room, as seen in the surveillance tape, but the well-prepared prosecutor (thanks, A!) produced an archery certificate from Ali’s days at summer camp which proved otherwise. Ali later revealed that she and her bunkmate rigged the targets, but for some reason, she didn’t think this was important enough to share during her trial. 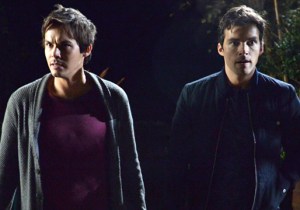 STABBIN’ IN THE WOODS | Archery turned out to be a popular theme this week, as a mysterious bowman — or bow-woman, I don’t know — nearly shot Ezra and Caleb when they were looking for Mike in the woods. The guys eventually found him maced, beaten and tied to a tree, but Tanner wasn’t especially interested in their story. She was more concerned about why they didn’t file their report in the county in which the attack took place. (Damn you, “protocol”! Caleb’s rant against the corrupt police system was so spot on.)

And unless we’re being served up another classic PLL red herring, all signs point to Andrew as the unidentified archer. Not only was he conveniently unable to answer Aria’s call that night, even though he promised to be available 24/7, but he’s also a freaking Path Finder Scout! As in, he’s spent a lot of time in the woods! And he probably knows a thing or two about bows and arrows! Even Jenna, pre-surgery, could see where I’m going with this. 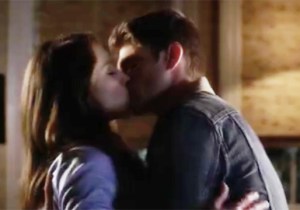 #SPOBYFOREVER | Of course, the episode wasn’t a total disaster. Before being arrested, Spencer had a much-needed heart-to-heart with Toby, who told her that Tanner was making him choose between being a cop and being her boyfriend — and in a surprising twist, he said he’d choose her! They kissed, and everything seemed right with the world, but we all knew it wouldn’t be long before the other shoe dropped.

With the #BigAReveal now just one week away — seriously, that promo gave me a heart attack — it’s time to weigh in with your eleventh-hour theories: Is Andrew as bad as he seems? Will Spencer and Toby stand the test of time? And where the #$%^& is “A” taking the girls now?! Drop a comment with your thoughts and theories below.