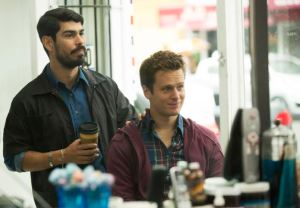 HBO’s Looking closed out its second season Sunday much the same way it ended its first: With Patrick jockeying between Kevin and Richie. The one key difference? This time around, Richie had the advantage, at least that’s my take on the sweet, subdued closing scene.

Below, series creator Michael Lannan offers his interpretation of that barber shop-set cliffhanger, clarifies the state of Patrick and Kevin’s tattered relationship, and teases the possibility of a new romance for Patrick in Season 3 (assuming there is a Season 3).

Oh, and yeah, he knows how you feel about Agustin.

TVLINE | When Patrick told Richie, “I’m ready,” what was he really referring to? Because it wasn’t the buzzcut.
[Laughs] He’s ready to go after what he wants. I don’t necessarily think he’s saying he’s ready for Richie though. He just reaches a new place within himself, and has a better idea of what direction he wants to go in with his emotional life and his relationships.

TVLINE | But it can’t be a coincidence that the person he goes to at that moment is Richie.
No. Definitely not. Kevin’s last question to Patrick is, “Do you trust me?” And I think Patrick answers that question [by going] to someone he does trust, someone he feels safe with and is on the same page with him in many ways. It’s not a coincidence but it’s inconclusive what’s going to happen between Patrick and Richie.

TVLINE | Was Patrick looking for a reason to cut and run from Kevin? Because he was really blowing the Grindr thing out of proportion.
That’s an interesting question. Kevin has that great line: “Is this fight to keep us together or to break us up?” I don’t know the answer. People will probably see it both ways. He did react very strongly, but he also [raised] a good point that they have different ideas about relationships and monogamy. 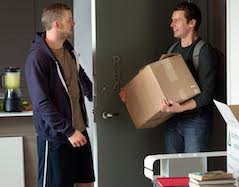 TVLINE | Some fans find Patrick’s brand of innocence and naiveté cloying. And I’m sure this finale won’t do anything to change their opinion, especially with regard to the Grindr stuff. The fact that he would be shocked that Kevin would still have the ap on his phone seemed a bit of a reach, even for him.
I think it was more of a culmination of things for Patrick. He may have been overreacting. He may be naive. But something really resonated for him in this situation. Perhaps it triggered some other things about Kevin. I personally don’t think it’s unusual for people to have Grindr on their phones to just check out the scene.

TVLINE | I’m calling bull–t on Patrick’s claim that he deleted Grindr off his phone.
[Laughs] You could be right.

TVLINE | Did Patrick and Kevin break up?
I think it’s ambiguous. Patrick is clearly turning away from Kevin in that moment. It’s not conclusive but it seems likely at this point. It was a pretty big rupture.

TVLINE | If there’s no Patrick and Kevin, does Russell Tovey still have a major presence on the show moving forward? He’s not really part of that core circle of friends.
We love Russell and we want to have him in the show as much as possible. We’re still thinking about what happens between Patrick and Kevin.

TVLINE | I’m sure you’re aware that Agustin isn’t the most beloved character on the show.
Mmmhmm.

TVLINE | Was his arc this season — the new boyfriend, the new career working with homeless teens — part of a concerted effort on your part to make him more sympathetic in viewers’ eyes?
I don’t know if we thought of it in those terms exactly. We wanted to force him into relationship with someone who helps others professionally, and into a world where people need help and guidance. And Agustin hasn’t really had to be 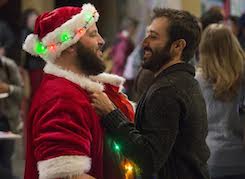 around people like Eddie. Nor had he had people really need him in that way. We wanted to see what would happen if we put him in an environment where he was forced to think of other people beside himself. And I think the end result has been him becoming a lot more sympathetic to a lot of people, and we’re happy with that, too. It’s shown another side to him; he’s gotten deeper and richer and more complicated. But people like Agustin don’t ever change completely.

TVLINE | What’s been the motivation for keeping Dom from tasting success?
We wanted to show that not everyone’s dreams come true and you can still find a way to be happy. There are so many interesting dynamics that come up in that journey, one of them being the rupture between Dom and Doris and how money can come between friends. And how your dreams for yourself can confuse your relationships, especially when you’re overly ambitious.

TVLINE | Did you write tonight’s episode as a season finale or a series finale?
We wanted to write a season finale, because we feel like there’s much more to come with Patrick and Kevin and Richie and that entire world. We didn’t think of it as an ending to the entire series.

TVLINE | Looking ahead, and let’s assume all goes well and you get that pickup, is it fair to say that Season 3 would show us what a Patrick-Richie relationship looks like?
We’re still thinking about that. It may be about what happens with Patrick and Richie now. I don’t think Kevin is completely out of the picture though. But, also, there’s space for some entirely new possibilities that Patrick hasn’t even experienced yet. His statement about being “ready” at the end of the episode — I think we’re going to find out what he’s ready for.

TVLINE | Hmm… I have to say, whenever Patrick’s in a scene with Dom, my antennae picks up a spark or two. There’s something there. You agree?
[Laughs nervously] Oh, Michael… I don’t know if I can go there. But I will say they obviously have a history together so… who knows?