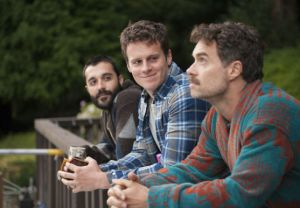 Will HBO turn a blind eye to ratings and pick up Looking for a third season? That’s the big question looming over the Jonathan Groff-led dramedy, which airs its Season 2 finale tonight (10/9c).

“I’m cautiously optimistic,” series creator Michael Lannan tells TVLine of the show’s renewal chances. “HBO has always given us a lot of support. They love the show.”

And even more important than their affection for Patrick, Agustin, Gus & Co., is their understanding that ratings aren’t everything — which, in Looking‘s case, is a very good thing. (The show’s last episode drew 300K viewers and .14 demo rating).

“[HBO realizes] there are other things more important than numbers,” Lannan acknowledges. “Our numbers have been OK, just not incredible. HBO has been great and, hopefully, they will continue to be.”

Are you Looking forward to a third season of HBO’s under-the-gaydar show? Share your thoughts in the comments!