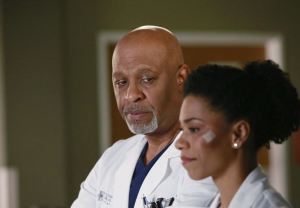 What’s in a name? This week’s Grey’s Anatomy had the answer.

Though the episode was called “Don’t Dream It’s Over,” it seemed very much like it could be over for Meredith and Derek. For that matter, it looked ever unlikelier that Calzona would reunite or that Richard and Maggie would pose for a family portrait.

So were we wrong to hang our hopes on an optimistic title? Read on and find out!

ALL YOU CAN CHEAT? | After her disastrous call to Derek’s cell at the tail end of last week’s Grey’s, Mer told Alex and Maggie (who is proving to be pretty good comic relief) that the woman who answered “sounded happy and tall with a lot of great hair.” And ever since, Grey had just been leaving voice-mail messages with her “short, twisty, mad voice.” Alex and Maggie assured Mer that Derek wasn’t cheating, but as soon as she had the chance, she asked Callie if she’d had any clue that Arizona was stepping out. Later, Maggie came up with a million reasons why a strange woman would answer Derek’s phone, Alex noted that “if a guy still wants to do you, you’re solid,” and Callie tried out a “Team MerDer!” rallying cry. Nonetheless, Mer wasn’t sure that she could trust her husband not to start over on her the way he had Addison. Then, in the episode’s final seconds, Derek showed up at his and Mer’s doorstep ready to explain. And, judging from the scenes from next week, neither she nor we are gonna be happy about what he has to say!

FATAL ATTRACTION | After Callie’s Internet date was cut short by a page from trauma, the woman left the doc wanting more by saying goodbye with a lingering kiss… which Arizona just happened to see. Later, Callie was irritated that she felt the urge to apologize for kissing another woman. “Hey, Arizona kissed other women – and then some,” Mer noted (I’m paraphrasing, obviously), “while you were still married.” Later still, Arizona asked how long Callie had been seeing the woman, and Torres stood up for herself so forcefully that Robbins scarcely got a word in edgewise. In fact, “Godspeed” was about all she did get to say. “Go kiss everyone.” But at the hour’s end, Robbins finally admitted, “I wasn’t jealous, I was just worried” – she’d been out with that woman herself, and she was a total nutjob!

SUCKER PUNCH | After being decked by the old guy who drove into the home of a punk rocker and his pregnant wife – the aforementioned trauma – Maggie learned that the driver has Alzheimer’s (or it appeared that he did) and went on a tirade about how, if his missus couldn’t be a responsible caregiver, she shouldn’t be one at all. Ben tried to hush her up since she was ranting in front of Richard, but she didn’t get the message, so her father quietly disclosed that his wife had had the disease. Later, he confessed, “It wasn’t just my wife. Ellis had Alzheimer’s,” too. At that, Maggie exhaled in relief. She already knew that she was genetically predisposed to Alzheimer’s, she’d just been “worried it came from you.” All of which I think counts as father/daughter bonding, right? Really depressing father/daughter bonding.

BACK TO… WAIT, WHAT’S NORMAL? | Picking up right where last week’s episode left off, April – high off the call from the little girl who’d saved her mother – tried to seduce Jackson in a supply closet. Later, when he caught her tearing into a patient and pulled her back into a closet to discuss it, she took off her top and again became annoyed when he didn’t seize the opportunity to get it on. At the end of their shift, she found her husband waiting to take her home and lit into him for treating her like she’s fragile. “I just want to be myself again,” she yelled. And finally, he got it, so they had sex in a car.

IN OTHER NEWS… | Though Owen and Amelia’s tryst was interrupted by the buzzkill trauma page, they eventually reconnected and sweetly picked up where they left off… until they got beeped yet again! After the mother-to-be died, Arizona, Alex, Amelia and Bailey managed to deliver her baby. But the situation had been so intense and upsetting that Jo broke down. When Alex caught up with her, she asked how on earth doctors were supposed to handle so much tragedy? “It’s too freakin’ hard and sad and messed up,” she said. Only it was exactly that caring and empathy, Bailey noted, that was “gonna make [her] such an excellent doctor.” Finally, Stephanie continued to obsess over Mer’s streak until Grey tore her a new one… and then gave Edwards credit for saving the punk rocker herself.

So apparently, there’s not much in a name. Mer and Derek are obviously in trouble, and Calzona are really moving on. How are you handling it all? Hit the comments.