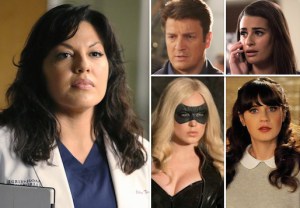 Has romance been prescribed for two Grey’s Anatomy docs? Will the original Team Arrow get some alone time? How will Castle mark a milestone? Will Glee‘s grand finale satisfy? Read on for answers to those questions plus teases from other shows.

Both Stephen Amell and Colton Haynes tweeted or Facebooked ominous-sounding things about the 65th episode of Arrow (airing April 15). Is there something (or someone) fans should be worried about? –Sarah
“You’re just going to have to wait and see” is the answer from EP Andrew Kreisberg, who then adds: “We’ve certainly had major characters die in the past, so we haven’t been shy about that. And I can promise that even more so with this season, every episode that comes along, the show’s never going to be the same. It’s really exciting that the show feels like it’s strong enough to be able to weather cast changes or survive paradigm shifts.”

I really miss Arrow‘s trio dynamic of Oliver Queen, Felicity Smoak and John Diggle. Is there anything coming up for them together? –Brittany
In a manner of speaking, yes, there is. “We have some really good Oliver/Diggle moments, 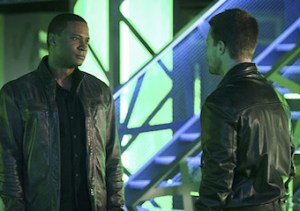 and we have some incredibly confrontational Oliver/Diggle moments in the latter part of the season that I think will have implications that reach past this season,” Stephen Amell answers. “And we have a lot of Oliver and Felicity in Episode 20, because they’re away with Diggle and some other people on a mission.”

Do you have any scoop on Castle‘s 150th episode? Anything special fans can look forward to? –Sandra
UPDATED! This just in, fresh from showrunner David Amann: “Obviously, the 150th episode is a milestone for the show but it also directly precedes the season finale. At this point, we intend Episode 22 to be a buoyant, classic episode of Castle, while [the finale] will focus on compelling, high-stakes story-telling surrounding Castle and Beckett mythology.”

Hey, what can you tell us about upcoming New Girl episodes? –Denizcan
Hey, I can share that when the show returns on March 31, Jess sends her first “sext” — and then panics when finds out that the recipient has died. Cue her scramble to find the deceased’s phone before his new girlfriend does. In the same episode, SNL alum Nora Dunn guest-stars as Schmidt’s mother, Louise, who arrives in town just as her son is readying to invest in the bar with Nick.

Got any scoop about Ward on Agents of S.H.I.E.L.D.? I miss seeing him on the show. –Amy
Well, you won’t miss seeing him much longer, at all. And when he does resurface, alongside Agent 33, think: “Opening scene from Pulp Fiction.” Bonus scoop: By the end of the next episode, Skye will have something in common with Steve Rogers.

A few weeks ago you gave us this Grey’s Anatomy scoop about a “new fella for the ladies of Grey+Sloan Memorial.” Do you know what episode this “Jack Pruitt” will appear in? –Tanja
Kevin Alejandro (Southland, currently on The Returned) will play police captain Jack in the April 2 episode – and thus far is slated for just that one appearance, though I hear the role is still potentially recurring. Meanwhile, in the same episode, Taylor John Smith (aka Hawaii Five-0‘s Young Steve McGarrett) guest-stars as a class trip chaperone that Stephanie takes a shine to.

In his most recent appearance, Bones‘ Max hinted at hiding some secrets from his daughter. Are there any plans for those secrets to resurface and be explored? –Amelia
We delivered your Q to no less than Emily Deschanel, and she responded, “Yes, we get to the bottom of and explain certain things from my childhood. Max lies to me again and doesn’t tell me where he’s going, and I get very suspicious. But then things are revealed that help us understand certain things about Max, his history and my history with him.”

Glee is ending on Friday, and I’m feeling sad yet relieved at the same time. I would like the mother of all scoops, and some assurance that this finale won’t be as bad as How I Met Your Mother, or True Blood, or Dexter. Pretty please? —Samantha
If the buzz trickling out of McKinley is to be believed, the Glee finale will be viewed as a (mostly) satisfying conclusion to the show’s six-year run. The final shot, in particular, sounds pretty damn near perfect, IMHO. On the scoop front, the five-year time jump that comprises much of the final act will allegedly find one character pregnant, but there’s a twist. Also, Rachel will have bid adieu to single life, but the identity of the man on her arm may surprise you. (Or it may not.) 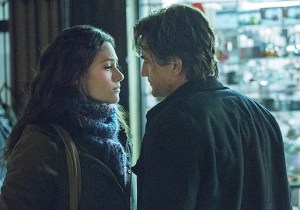 Fiona’s really trying hard this season to get her life together, and chaos still just follows her around. Gus is a real stable person for her — is he sticking around? –Adrienne
Yes, though that doesn’t necessarily mean he’s a part of any happy (by Gallagher standards) ending. Because although Fiona wants to work things out with her hubby, that spark between her and boss Sean is far from over. “That is a storyline that will really rev up” in the back half of the season, executive producer Nancy Pimental says. And in true Gallagher fashion, it’s “one of the things that’s left as a cliffhanger” in the finale.

Any scoop on Caity Lotz’s role in the Arrow/Flash spinoff? –Catarina
Ah yes, this spring’s burningest question: Will she play Sara, and if so, how will that character be resurrected? Or will she play someone new? “We definitely noticed that people have been asking those questions and we’re glad. And we kind of want them to ask those questions a little longer,” says Marc Guggenheim, an EP on the spinoff project. “I would say that by May you’ll know the answers to those questions, but we’re going to keep those cards a little close to our vests for a while.”

Is there anything you could tell me about The Flash??? I’m kinda curious to know what comes next! –Sofia
For one, I can tell you that Liam McIntyre’s Weather Wizard will be back not just next week, but in another episode airing later this season. Also coming up are assorted flashbacks, to help flesh out some characters’ pasts. “In Episode 17 (airing April 1), we’re going to get a flashback from [Dr. Wells’] point of view, which we’re really excited about,” says EP Andrew Kreisberg. “And in [another] episode, everyone’s going to flash back to when Barry was in the coma. So, you’ll see that time from Wells’ point of view, Caitlin’s point of view, and Joe, and Iris…. You get to fill in a little bit more of the backstory.”

What will Laura Benanti’s Supergirl role mean for her Nashville character if it gets picked up for Season 4? –Meaghan
If Supergirl gets super-officially greenlit and if Nashville is renewed, I see no conflict. Benanti (thus far) isn’t a series regular on Nashville, and even if she were to get promoted, typically you’re allowed to sneak away for three appearances on another show – and I can’t imagine Kara chatting up her dead Krypton mom’s avatar in every episode.