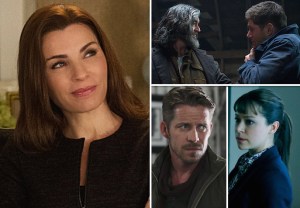 Who on The Good Wife is doing a double take? What does Cain’s comeback mean for Supernatural? What brings back Once Upon a Time‘s Robin? Is a new hunk just what the Grey’s docs ordered? Read on for answers to those questions plus teases from other shows.

When in the world is The Good Wife coming back? Please give me some scoop. I need it in my life. –Bryan
The acclaimed CBS drama returns March 1, with – not surprisingly – a highly entertaining episode in which:
1) Lemond Bishop finally calls in that favor from Kalinda (and while it’s nothing you might predict, it portends to have lasting repercussions)
2) Dylan Baker gets to play a dual role, to very amusing effect, while Laura Benanti returns as the cunning Colin Sweeney’s current, delicious catch
3) Kindly Ed Asner guest-stars as a PAC contributor who’s full of surprises, ultimately leading Alicia and Frank Prady to mull ending their congenial “back channel” arrangement, and
4) You even somehow get a Toby Ziegler mention!

Any chance I could get some scoop on my favorite Once Upon a Time character, Robin Hood? –Nicole
As previously hinted (and despite how Season 4A ended), Sean Maguire will be back in some capacity this spring as Regina’s soul mate. “And for the uber-observant fans,” series cocreator Adam Horowitz hints, “we’re going to shed some light on just why he might have looked different and not had a tattoo in Season 2” — that is, back when the role was was originally played by Tom Ellis. (Do I smell a Dr. Kelly Nieman crossover?)

Do you know if we will see Emma’s childhood friend Lily on Once Upon a Time again this season? –Dee
Horowitz was a bit less forthcoming on that topic, offering only the teasey, “We sure hope so!” UPDATE: Horowitz has since tweeted out this title page for Episode 19:

How about another #OnceUponATime #titlespoiler? Hope to see ya March 1! pic.twitter.com/K4hr7GScLo

I keep hearing rumours that NBC is shipping Constantine over to Syfy as the more source-hugging Hellblazer. Are the fans just clutching at straw houses built on quicksand, or might we just see this darker-toned series come into being? –Katie
I followed this lonnnnnng breadcrumb trail to its original source, and then did some asking around on my own, and the short answer is no, there is zero truth to the rumor that Syfy will ride to Constantine‘s rescue, if need be. (Sorry, just the messenger!)

Can you give us the last ever Mentalist spoiler? –Sal
That’d be fitting, since I happened to be granted Bruno Heller and Robin Tunney’s last ever Mentalist interview, pegged to this Wednesday’s double-episode finale. So here goes: Before Jane and Lisbon can even entertain the idea of heading down the aisle, they first must outwit the psychic-obsessed serial killer dubbed Lazarus. “It’s not someone you’ve met before,” series creator Heller assured me. “And as Robin pointed out to me, I don’t think we’ve done any other serial killers over the years as strongly as this one, except for Red John, so it’s very much a ‘full circle’ kind of event.”

I was hoping for any scoop you might have on Stalker? –David
Episode 19 of CBS’ yet-to-be-renewed freshman drama will introduce Detective Ryan, a recurring character described as smart, handsome, tech-savvy and charming, and boasting a big sense of humor. Working out of a similarly specialized unit of the LAPD, he will help the TAU with a big case.

Will Sam meet Cain in this week’s Supernatural episode? Is there going to be a parallel between Cain/Abel and Sam/Dean? –JJ
The Winchesters will certainly be hoping that Cain can help them out with their Mark problem. “Let me say this: I think the episode with Cain is really great,” executive producer Jeremy Carver says of Timothy Omundson’s return on Tuesday. When Dean seeks out the former Knight of Hell for some guidance, “from Cain’s point of view, he thinks he’s being helpful. That’s cagey and mysterious and deliberate in the way I’m saying that. But once you see the episode, you’ll see what I mean.”

Got something on my favourite Queen Catherine from Reign? –Astrid
I’ll meet you halfway with scoop on a queen – the queen? – seeing as for Season 3 the CW drama is casting the series regular role of a young Queen Elizabeth. The twentysomething monarch is described as “beautiful, cunning and brave, vulnerable and in love.”

Since Arrow‘s Oliver Queen saw his ex on The Flash, will there be a storyline with that, or was that a one-time encounter? –Elizabeth
Scripting that fleeting encounter with Oliver’s baby mama when they did “was a bit of a no-brainer,” Arrow showrunner Marc Guggenheim explained to me. With Oliver visiting Central City — the same place his secretly pregnant girlfriend scurried off to after taking a payoff from Moira — “How could we not take that opportunity?” he notes. “That was really the reason to do it.” But as of now, I’m hearing of no imminent plans to revisit the paternity shocker.

Any chance we’ll learn a little bit more about Alison or Cosima on Orphan Black this year? Maybe something about their parents, or how they first came to join the Clone Club? — Katie H.
We may gleam some bits of backstory this season, but don’t expect any big answers just yet. “We’re always trying to go forward and fill in blanks as we push a plot and a story forward,” cocreator John Fawcett tells TVLine. “That being said, it is an important part of the story that we understand how they found out that that they were clones. I don’t know if that’s necessarily going to find its way into Season 3, but needs to find its way in somewhere.”

Huge fan of Grey’s Anatomy! Any news yet on the season finale? –Connor
Only that there may be a new fella for the ladies of Grey+Sloan Memorial to fawn over by season’s end. Just weeks before the finale arrives, the ABC drama will introduce the possibly recurring character of Jack Pruitt, a strong, rugged, handsome and tall police captain in his late 30s. Which available (and tall?) female might find this hunky hero to be arresting?

Will Dylan Einstein return to Criminal Minds? –Emilie
Alas, I am told that at this time no encore has been booked for the flirty forensics whiz (played by guest star Candace Hammer).

Is Daniella Alonso return to The Night Shift? Her character is my favourite but I don’t see her in any Season 2 promo or poster. –Ivan
Sorry, Ivan, but Alonso/Dr. Landry De La Cruz will not be a part of the NBC medical drama when it returns on Monday, Feb. 23 at 10/9c.

I’m intrigued by Bones‘ Booth and Brennan wanting to keep their new baby news on the QT. Does it stem from a medical reason? –Jessica
When I spoke to T.J. Thyne, he did not illuminate on the why of the secrecy, but avowed that it makes for a “really fun episode where they’re very giddy and excited, and we’re all like, ‘What the hell is going on with the two of them?!'”