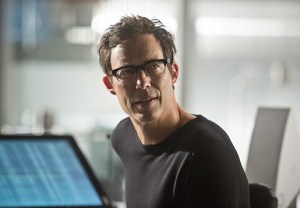 The Flash is spilling villainous secrets and stirring up romantic feelings this Tuesday to make for “the best episode we’ve done,” executive producer Andrew Kreisberg proclaims.

“It’s everything that The Flash can do as a TV show,” raves the EP, noting that the hour is directed by Thor Freudenthal, who also helmed Arrow‘s fall finale “The Climb.”

The aforementioned heart comes in the form of some developments in Barry’s love life — awkward double date alert! — while the metahuman Weather Wizard (played by Spartacus‘ Liam McIntyre) brings the fright.

Read on as Kreisberg and the cast preview S.T.A.R. Labs’ reaction to Wells’ identity, “WestAllen’s” future and more.

NOT-SO-MELLOW YELLOW | When Cisco realizes that not everything is adding up about the day that Dr. Wells battled Reverse-Flash, the S.T.A.R. Labs team will be forced to confront the idea that their mentor is more foe than friend. “Caitlin doesn’t want to hear it,” Danielle Panabaker shares. “Caitlin sees Wells through rose-colored glasses. Any [information] that he is not that perfect is going to be very difficult for her to believe.” Her colleague Cisco also “does not take very well to it,” Carlos Valdes describes. “It’s bad. And it’s kind of a snowball [effect] that starts” on Tuesday’s hour, which marks “the beginning of the end.”

But one person will remain in the dark about Wells’ true nature even as more intel is uncovered. “Barry doesn’t find out in this next episode,” Grant Gustin reveals. “People discover, and the audience discovers, a lot, but remember, time travel is also introduced in this episode… The audience learns a lot that they will continue knowing that characters might not necessarily know.” And whatever you think you know right now, forget it; Gustin promises “a twist with the Reverse-Flash storyline that no one has guessed yet. It’s going to surprise everybody.” 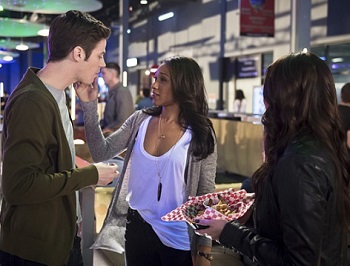 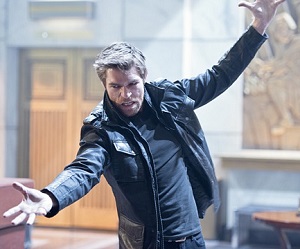 THE WEATHER WIZARD, TAKE TWO | Spartacus hero Liam McIntyre’s Mark Mardon is out for revenge for his brother’s death, which is very bad news for Joe West but a treat for fans of the former gladiator. “I think people will probably be surprised at how good [Liam] is at playing the dark, evil character,” Kreisberg says. “We wanted a Weather Wizard who was more in control of his abilities and less beset by them… We’ve been really blessed with the Rogues, with the people that we’ve found and, hopefully, building up to one day having a real Rogues episode.” Because Mark is driven by his devotion to his brother, “it speaks to what Wells is going through,” Kreisberg adds. “You can be bad and do bad things and still care about people and still have relationships and still have love for other people. It’s why this episode feels so primal. Because everybody is acting out of love, in their own way.”