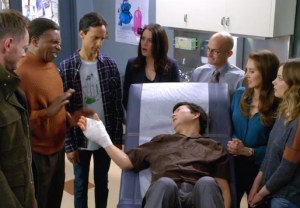 With Community down three cast members, the theme song’s closing words (“one by one they all just fade away”) have never been more appropriate. Nonetheless, the start of Season 6 – its first on the Yahoo Screen streaming service – is a promising one.

The remainder of the Greendale 7 quickly fill their current vacancies with two distinct personalities — one of whom looks a lot like the school’s former head of IT, and the other looking a heck of a lot like that guy from The Cape.

NEW SHIRLEY | With Shirley in Atlanta tending to her ailing father whilst working as a chef for a paraplegic detective (Steven Weber, of course), her seat at the study table has been filled by the pompous Frankie Dart (Criminal Minds’ Paget Brewster), a do-gooder hired by Dean Pelton to keep Greendale in check. Though everyone but Abed is initially concerned by her firm business ethic and no-nonsense demeanor — so much so that they create a secret underground speakeasy when she removes all forms of liquor from the teacher’s lounge — she quickly loosens up and promises to keep their eccentric campus as-is, as long as it doesn’t hurt the school’s chances of remaining insured.

INSPECTOR GADGET | Elroy Patashnik (Keith David, Enlisted) fills the Old Curmudgeon Role first filled by Pierce (R.I.P.) and most recently by Professor Hickey (Better Call Saul’s Jonathan Banks). He first comes to the attention of Jeff when Dean Pelton purchases a virtual reality system using the school’s minuscule budget. When he attempts to make a return on the dean’s behalf, Elroy refuses. We soon learn that the sale means as much as it does to Elroy because he failed to accomplish his life’s goals as an innovator and technologist. He eventually lets the dean return the system; in return, the dean offers him $500 for the pleasure he got from using it, as well as a chance to start over as a member of Greendale’s student body.

MEET THE PARENTS | Episode 2 introduces the world to Britta’s parents (former Clue co-stars Martin Mull and Lesley Ann Warren), a well-meaning mom and pop who’re eager to help their fiscally-unstable daughter despite nearly a decade of being ignored. Though the former hippies have mellowed out in their later years and welcome any amount of closeness Britta will allow, she resents them for the conservative suburban types they became amidst her rebellious adolescence. She soon learns to let them in after a pow-wow with Frankie, in which the newest member of Greendale’s faculty points out that people always hate their parents as kids, and only learn to appreciate them as adults — kind of like how America learned to love Jimmy Fallon after he left Saturday Night Live. If Britta ever wants to move past the years they weren’t the parents she needed, she needs to accept them for the parents they can be now, and she eventually does just that.

Ultimately, the first installments of the Yahoo Screen era are both evidential of the veteran comedy’s age, and of the difficulty of writing for an ever-changing cast. Fortunately, Greendale remains as weird and self-referential as ever, and that’s about all we can hope for from a show that’s been through as much as this one. Best of all, we’re one step closer to achieving that whole #SixSeasonsAndAMovie prophecy.

OK, your turn: What did you make of Tuesday’s double-episode premiere? Were you pleased with the show’s handling of Shirley’s departure? Vote in our poll, then sound off in the comments!