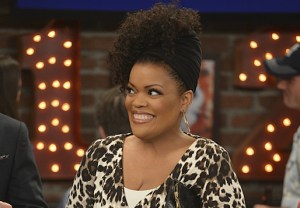 On Thursday’s episode of The Odd Couple (CBS, 8:30/7:30c), Dani turns to Oscar and Felix for help lining up a date to her high school reunion.

And as weird as it sounds, star Yvette Nicole Brown says, the guys’ tips and tricks actually kinda work.

“It sounds crazy that she’s listening to these two guys,” Brown tells TVLine. “She doesn’t question them, because they’ve been in the trenches and they’ve made it to the altar at some point. She really isn’t judgmental about where they are right now.”

Despite the fact that Oscar and Felix have been dumped by their wives, their advice works well enough for Dani that she doesn’t even consider the source.

“They both have well-tested strategies that work for them and friends they’ve set up in the past,” Brown notes. “They come up with the idea of finding her love, and she’s going to go with the flow.”

Scroll down for all of Brown’s thoughts on tonight’s Dani-centric episode, the experience of creating a new character after five seasons on Community and the possibility of returning to the NBC-turned-Yahoo Screen comedy (which premieres March 17).

TVLINE | We haven’t seen too much of Dani just yet, but she seems like a wildly patient person. Will that patience be tested when Oscar and Felix interfere in her love life?
I never thought of her as patient, but I think that’s the best description I’ve heard. What is going to be tested is Oscar and Felix’s patience with each other as they try to set Dani up. She’s going with the flow a little bit more with what Oscar comes up with than what Felix comes up with. 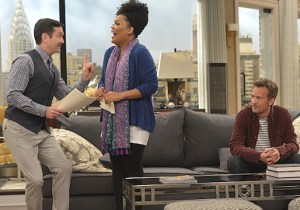 TVLINE | Are any of their distinctive dating strategies just absolutely awful?
I will say this: What looks like it’ll work on paper is disastrous. You may think you know what’s right for [Dani], and it may not be right for her. She’s very opinionated, and when you’re setting someone up that’s opinionated, it’s going to be a rough road.

TVLINE | What has it been like developing an entirely new character after playing Shirley for so long on Community?
Dani has been a bit of a discovery, whereas with Shirley I kind of understood who she was. I knew from the first episode of Community what her role was on the show. She was the den mother [and] the judgmental voice of reason. With The Odd Couple, because my character was a recast, they were recreating who this person was going to be. They were building who she was based on my interaction with the rest of the cast, as well as characteristics about me. I’m learning something new about her everyday… And [that’s] not to say that I didn’t learn more about Shirley, too. There’s always a chance for discovery as seasons go by with these characters. 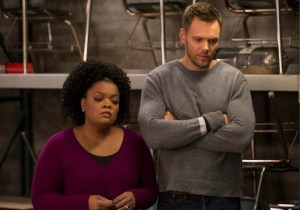 king of Community, are you as excited as we are for Season 6?
I’m so excited! I’ve visited the set, and I joke that Joel [McHale] has said a few times to “Cut the cord, Yvette!” [Laughs.] I’ve seen a lot of what they’re doing and Keith [David] and Paget [Brewster] are amazing.

TVLINE | Any idea how or when your absence might be addressed?
We’ll find out in that first episode. Is she dead? Is she in Barbados sipping a mai tai? Is she back with Andre? I like to think of her off somewhere baking brownies and raising her kids. We’ll see if that’s where she is.

TVLINE | Assuming she’s not dead, have there been any talks about Shirley making a return appearance?
I’ve said from the beginning that if they want me back, I’ll go. It was always a time-spent-on-set issue, not a being-on-set issue. If they were to find a way for me to come back and I wouldn’t have to be there for 16-hour days, I would totally do it, because I love the show, I love my cast members and the crew is awesome. It was a very lovely parting. There was no animosity or hate on my side or from Sony or [series creator] Dan Harmon. When the movie happens, because I have complete faith in Community fans — they are not going to get this sixth season and not get this movie — I will hopefully be invited to take part, and I will happily do that.

TVLINE | Well, someone has to rescue Troy and LeVar Burton from those pirates! It also looks like Shirley’s sandwich shop is still a Greendale cafeteria fixture.
So true! [Laughs.] I loved going back to set and seeing Shirley’s Sandwiches was still there. Shirley’s still there in spirit.