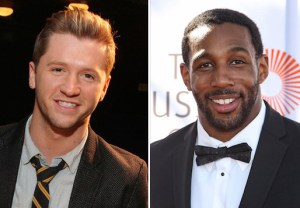 So You Think You Can Dance is offering two very charismatic incentives to retain long-time viewers who might have some trepidation about Season 12’s new “Stage Vs. Street” twist.

Fox’s summer reality sensation is bringing back Stephen “Twitch” Boss and Travis Wall – who rank among the show’s most popular graduates —  as mentors to the Top 20 finalists, the network announced Monday.

SYTYCD‘s tweaked structure will begin during the Las Vegas callbacks round — with contemporary, ballet, jazz and tap specialists getting separated into the “Stage” group, and hip-hop, animation and breaking experts lumped together under the “Street” heading.

Once the voting rounds begin, Travis will mentor the stage dancers and Twitch will mentor the street dancers, all of whom will be challenged weekly to perform a variety of styles. One dancer from each genre will be eliminated each week leading up to the season finale.

Travis rose to fame as runner-up on SYTYCD‘s second season, while Twitch finished second in Season 4.

Season 12 will also see some big changes at the judges’ table: Longtime panelist Mary Murphy is out, with Paula Abdul and Jason Derulo now sitting alongside the returning Nigel Lythgoe.

Check out a video message from the show’s new mentors below, then hit the comments and tell us whether the Travis-Twitch twist has you more or less excited for the show’s return!