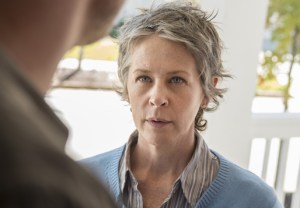 As the fifth season of The Walking Dead lumbered toward the finish line, the Internet was abuzz with speculation about who’d kick the bucket next. The smart money was on Noah. (Back in January, portrayer Tyler James Williams signed on for the Criminal Minds spinoff.) But was it the teen who met his maker in “Spend”? Read on and find out!

TOP OF THE MORNING | The episode kicked off with Gabriel becoming so upset over a gift of strawberries left for him in his makeshift Alexandria chapel that he tore pages out of a Bible. (Cue a full-on meltdown in 3, 2… ) After the opening credits, Rick discovered that Jessie’s owl sculpture had been trashed. By whom? She couldn’t imagine. Nearby, Noah took a breakfast meeting with Reg to ask for a crash course in construction. Deanna’s husband was so delighted by the request – it meant that the youngster was in it for the long haul – that he gave Noah his notebook to jot down all of his future lessons. (Never a good sign when someone on this show starts planning for their future… )

Reluctantly on a run with Aiden, Glenn, Nicholas, Noah and Tara – their goal: find micro inverters to fix the power grid – Eugene whined that he was “not combat-ready or even for that matter combat-inclined.” Tough, said Tara, adding that it was past time for him to start pulling his weight. His response? He already HAD pulled his weight by getting the group to Alexandria with his lie about D.C. Shocked by the scope of his cowardice, Tara just shook her head in disbelief. After the brainiac found the electronic doodads in a warehouse, reckless Aiden shot at a walker wearing body armor. And shot at him. And shot at him. Glenn cried out for him to stop, but it was too late. Aiden hit the grenade that the walker had on it and wound up being impaled in the blast!

IMPALED BY COMPARISON | Though Eugene failed in his first attempt to protect an injured Tara – Glenn had to step in – he swore that he was up to the task so that the others could go try to save (dis-impale?) Aiden, who still appeared to be alive-ish. Back in town, when Sam bugged Carol for more cookies, she unleashed a hail of snark and sent him off to steal chocolate. Doing construction work near the compound, Abraham seemed to be thrilled that things went a little awry so that he could bean a few walkers. Meanwhile, a drunkish Pete paid a house call to Rick. On the surface, it sounded friendly — the doc even suggested that the newcomer bring in his kids for a check-up. But the tension in the room was thicker than walker blood. “Let’s be friends, man,” Pete said with a smile that I was sure meant “or else.” Rick shook on it, yet it was obvious that they were never gonna be buddies. (What common interest could they discuss but the Mystery of Jessie’s Broken Owl?)

Back at the warehouse of doom, a terrified Eugene carried Tara to safety while shooting walkers in all the wrong body parts. Simultaneously, though Glenn fought valiantly to save Aiden, his efforts were for naught. Before being devoured in one of the show’s gorier demises, the d-bag confessed that the crew members they’d previously lost hadn’t been the ones who’d panicked in the field, he and Nicholas had been.

DYING YOUNG | Fresh from saving construction worker Francine, Abraham learned that the Alexandria system is to leave anyone who’s in trouble for dead. (Same m.o. as Nicholas applied to Aiden.) Impressed by Abraham’s heroism, Tobin encouraged Deanna to put him in charge of the construction crew. “He’s leading them better than I ever could,” Tobin said. Down the block, Sam returned to Carol, chocolate in hand. And while she fought hard not to get the least bit friendly with him, she couldn’t help but become concerned when he revealed that he broke things when he was upset (like, say, an owl sculpture) and asked if he could have one of the guns. Later, off a futile visit to Pete and Jessie’s place, Carol told Rick that she’d deduced that the doc was hitting his wife and maybe his younger son as well. “There’s only one way it can go,” she added. “You’re gonna have to kill him.”

At the warehouse, Glenn, Noah and Nicholas became trapped by walkers in a revolving door. Eugene, of all people, rode to the rescue, honking and drawing most of them away. But, because Nicholas wouldn’t trust Glenn’s plan to get them all out safely, he escaped, and Noah was devoured even more horrifically than Aiden had been. At the getaway van, Nicholas was trying to strong-arm Eugene into leaving without Glenn and Noah when Glenn caught up with the creep and gave him a pounding. As the hour drew to a close, Gabriel showed up at Deanna’s and, as Maggie eavesdropped, insisted that Rick and his group were wolves in sheep’s clothing. “The day will come,” the rat said, “when… they will destroy everything you have here.”

What did you think of the episode? Did you cheer when Aiden bit the dust? Were you sorry to see Noah die, or did you blame him for Beth’s demise? Hit the comments!