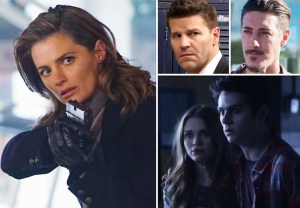 Is a Castle shake-up ahead? How will a Haven hero handle big Troubles? Is there hope for a Teen Wolf twosome? Which new face will support Bones‘ Booth? Read on for answers to those questions plus teases from other shows.

I’d love to read anything new you have for Castle! Please?! –M.
This is a bit interesting: I asked showrunner David Amann – on behalf of a reader, maybe? I forget – if there might ever be an episode that pits the men against the women, sort of how that one Lisa Edelstein episode did, but sticking with the regular cast. Think: Beckett, Lanie, Gates and Tori (and you could even throw in Alexis) vs. Castle, RySpo and a reluctant Perlmutter. And Amann said, “There may be something like that, where there’s a different configuration to the investigative team that emphasizes a couple of the women. That’s something to look for around [Episode] 21.”

When Haven returns, how is Duke going to handle knowing he’s unleashed all those troubles? –Aimee
As we await word on when Season 5 of the Syfy drama will resume, I hope I can tide you over with this: Presented with your question, executive producer Matt McGuinness answers, “Duke will struggle with the guilt of causing some serious pain to the town, and deal with it in a very Duke way: By being selfish, noble, clever, and brave — in that order.”

Any scoop on Strike Back, Grey’s Anatomy or Agents of S.H.I.E.L.D.? –Alamin
I choose Door No. 3, and in turn tease that Drea de Matteo’s “gifted” baddie when we first meet her on Tuesday is a bit more “Edward Scissorhands” than the new promo suggests; Jemma and Bobbi bond some over the “comes with the job” aspect of colleagues lying to each other; and May’s ex (played by Blair Underwood) gives her some guff when they reunite, stemming from an unreturned phone call.

When does the final season of Mad Men start? Any scoops? –Kathi
The acclaimed AMC drama launches its very final, seven-episode salvo on April 5. And having seen the season premiere — and after consulting the list of things we have been asked not to reveal – I shall tease:
* One of the characters goes on a surprising blind date
* An iconic hosiery product makes its debut
* Elizabeth Reaser fills a quite interesting role
* At least three series regulars are nowhere to be seen
* There will be a debate over who looks the most groovy these days, Stan or Ted
* There is a randomly spilled glass of red wine that is sure to launch 1,000 think pieces on “Who will die?”

Anything on Kalinda’s departure on The Good Wife? –Ricardo?
Only that before Archie Panjabi’s character exits stage left, one very loose, dangling thread will be dealt with — the fact that Cary was freed from the clink on evidence forged by his lover. “Certainly, that was a big moment, and it’s going to come back around,” affirms Matt Czuchry, who adds that it’s an especially “complicated thing” seeing as Kalinda didn’t intended for the fudged email to be submitted as evidence. What’s more, if it the hack does get exposed, it’d have significant implications for, at the very least, both her and him. “Oftentimes what happens with a character leaving the show is it’s a ripple effect for all the characters,” Czuchry says, “so that could happen here.”

This excruciatingly long Bones hiatus is coming down the home stretch. Please say you have some new spoilers to tide me over until March 26th? –Geraghty
Turns out, I do! As Ask Ausiello told you, the show will be revisiting Booth’s gambling problem. To that end, Alex Skuby (The King of Queens) will be guest-starring as Gavin Chadwick, Booth’s long-time sponsor at his gamblers anonymous meeting. There, he urges a reluctant Booth to “share” during the meetings, insisting that it is a vital step towards his recovery. Update/Bonus scoop: I just screened the second episode back (airing April 2), in which Brennan learns to use Twitter, and it promises to be funnier than any sitcom on TV that week. #SheDoesReallyBadHashtags

Bones has 12 episodes left to air in less than 12 weeks (if it were to end in mid-May). Do you know how Fox is planning to schedule it? –Cassidy
Indeed, there are 12 episodes slated to run pretty much straight through, beginning March 26. As such, I’m hearing that the season finale will likely not land during, but instead outside of, May sweeps.

Desperately seeking some Stydia hope on Teen Wolf. Can you give me any? –Mary
I’m not sure if this qualifies as “hope,” but Stiles and Lydia will be spending quite a bit of (platonic) time together in Season 5. “[They’re] at the forefront of … trying figure out the next mystery,” Holland Roden says of her and Dylan O’Brien’s characters. Lydia will also be heavily “involved” with Deputy Parrish, whom she vowed to help at the end of Season 4. In terms of romance, though, exec producer Jeff Davis teases, “She may not end up with the person you think she does at first” — so who knows?

Any news on Teen Wolf‘s new villains or new creatures? –Tom
How about the skinny on Cody Christian (Pretty Little Liars), who’s joining Season 5 as new werewolf Theo? “He’s a lone wolf that comes into Beacon Hills, and he’s got sort of a cloudy, mysterious past,” EP Jeff Davis says. “He’s looking for a pack, and he’s looking to be a part of Scott’s pack. Whether they accept him and whether they trust him is something that’s debated in the first few episodes.”

On Blue Bloods, are they trying to gear up for Jamie taking the detective’s exam? Seems like he’s been playing detective himself quite a bit lately. –Peter
I brought your question to showrunner Kevin Wade, and he said that while he has no “road map” for any potential sixth season, the thinking is that if Jamie has a particular ambition, “It might be for something that is not detective.” As he explains it, “The role of beat cop, which he is well suited to, is one where you react to something instantly, you use your judgment on your feet. While detective work is the opposite — something has already happened and you try to deconstruct it.” As such, Wade’s more inclined to see Jamie eventually “taking the sergeants exam, or in an undercover operation. There are better ways to use him, so we’re looking in those areas more.”

What are the chances for SmoaknLance happening on Arrow? –Nikki
I like your thinking, giving Laurel’s sad dad some happiness in the form of Felicity’s got-it-going-on mom. And Paul Blackthorne himself noticed that when he tweeted out this selfie of him and Charlotte Ross, “It did seem to go down well!” He thus seconds the “SmoaknLance” idea, saying, “I think that Lance deserves some loving in his life, don’t you? And I think it’d be hilarious. He’d be sitting there across from her at dinner thinking, ‘What is this in front of me?’ and at the same time, ‘Why am I so attracted to what’s in front of me?’ I think it’d be a brilliant couple, because they’re obviously so different yet seemingly so perfect in a crazy way, so I hope it happens.” As for whether it does happen during Ross’ Episode 18 encore, you’ll just have to stay tuned.

Now that Jane the Virgin is back, anything new and fun to share? –Gina
Our interest was piqued after these comical-looking photos of Rafael, his ex and a pooch, so we asked Justin Baldoni what exactly is going on. “There’s a celebrity that comes to stay at the Marbella, and Petra and Rafael are entrusted to watch his dog,” he describes. “You have some Lucy and Desi moments between the two of them. It’s very slapstick. It’s fun.”

Real questions, real answers. If you need the Inside Line on a favorite show, email InsideLine@tvline.com!  (With reporting by Vlada Gelman and Kim Roots)