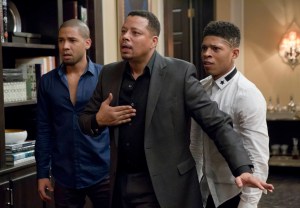 The phrase “No. 1 with a bullet” takes on a whole new connotation during this week’s Empire — thanks in part to a shifty dude named Reg, the Artist Formerly Known as Olivia from The Cosby Show and a confession that really could use an epilogue featuring Maury Povich and a DNA test kit.

Add one dose of a pantie-free Cookie lasciviously climbing atop a dining room table, Naomi Campbell’s Camilla dropping a colostomy bomb on Lucious, and Jennifer Hudson’s “music therapist” making like a Madonna video and mixing up the religious and the sexual, and “Sins of the Father” — Empire‘s final episode before next week’s two-part finale — certainly doesn’t skimp on the drama.

Still, the majority of the week’s “OMC” (oh my Cookie, obvi) moments are more about clearing a path to/laying the groundwork for a Season 1 finale in which “everything is going to change” (that’s a direct quote from showrunner Ilene Chaiken to TVLine).

With that in mind, let’s recap the action from “Sins of the Father” — and oh what sins they are!

But before we do… at the end of this post, we’ve got an exclusive video highlight reel of the hour — narrated by Ta’Rhonda Jones (the woman behind the endlessly entertaining Porsha).

“LUCIOUS, YOU ARE THE FATHER!” | I’m not sure who has the biggest reason to hate Lucious by the end of the episode, but my photo-finish camera gives the edge to Jamal. The family’s freshly out-and-proud middle son finds his connection to newly discovered daughter Lola is having a huge impact on his life — he writes a sweet song for her, says goodbye to love interest Ryan when the documentarian says he has no interest in reading What to Expect When You’re Dating a Hot Gay Dad, and then tells Lucious he wants to take custody of the child who’s been living in the Lyon mansion. 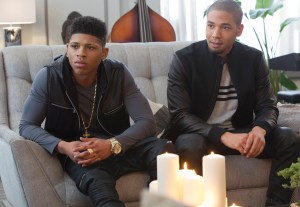 Papa Lyon, firmly entrenched in his ’70s-era homophobia, drops one of his ugliest lines in weeks — “Lola don’t need to be raised in that kind of lifestyle” — and it makes me feel some type of way (AKA wanting to put Lucious’ in an Oscar the Grouch-style split-level trash can.) But Jamal is holding his own these days, and his pointed response — “What if she’s not perfect? What if she has a deviant trait you just can’t look at?” — could just as easily be about his sexual orientation as Andre’s bipolar disorder. Also, we experience the world’s cutest scene ever — or at least on TV in 2015 — when Jamal and Hakeem serenade little Lola to sleep. HAVE I SHOUTED LATELY HOW MUCH I LOVE THE BROTHERLY LOVE ON EMPIRE?

Here’s where it gets crazy, though. Lola’s mother Olivia is trying to escape her crazy boyfriend Reg — but he catches her at the bus station on her way to Tampa. She, in turn, makes her way (with a relapsing Vernon’s “help”) to the Lyon residence, and it’s Jamal (with an increasingly paternal presence) who notices the “scary bird” tattoo on Reg’s arm. He puts two and two together — this man is the cause of Lola’s nightmares — but before he can make his way angrily across the room, Reg has his gun out, his eyes wild with rage.

Jamal — whose history of not being remotely intimdated by bullets makes me think he might be Actual Superman — is all, “Do it!” Cookie wrestles control of the thug for a second, but then winds up with a gun to her head. And finally it’s Lucious who intervenes — telling Reg not to direct his jealousy at Jamal, since Jamal is not actually Lola’s biological dad.

“I’m the father. I put the baby in her — not him,” says Lucious, and while we want to believe he’s spinning a yarn to save his family, the look on Olivia’s face tells us that the truth is rising up in the room like the unmistakable scent of cow manure in a dairy farm. “I promised her if she married Jamal, I’d make her a star.”

Lucious is probably right when he finally tells Reg to shoot him — that he’d be a hero to every person in the room (aka his entire family) — but Malcolm slinks around a corner and puts down Reg with a single bullet. (Ummm…might a cold-blooded kill in the family room be problematic for the Empire IPO? Just askin’.)

Cookie — witnessing yet another betrayal of her boys by the man she once adored — isn’t exactly thankful for Lucious’ Grand Gesture. “I wish he would’ve shot you,” she huffs, and I can’t say I blame her. 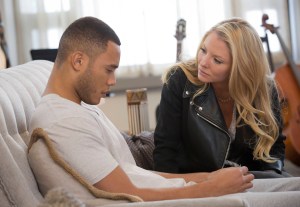 PUTTING THE ¡AI! IN IPO | Lucious skips going to family-therapy day at the psychiatric hospital where Andre is under 48-hour hold, while everyone else attempts to be soothing/encouraging/super reverential about the Andre-led IPO that’s about to go down. Only Cookie is thrown off-kilter by frank talk about Andre’s diagnosis — dismissing bipolar disease as “white people problems,” though it’s clear she’s just trying to put on a brave/tough front because she’s truly scared for her eldest. (Loved seeing her at the computer the same afternoon, doing her research on the disease.)

Over the course of the hour, we get a flashback to Andre’s first psychological break — a college-era manic episode for which Mary J. Blige is on hand as a party guest — and we also see Andre reject Rhonda in the present day for her role in his being committed. He refuses to return home for the sign-over of his shares — the last step to the IPO filing — and coldly tells his wife her power of attorney is in a signed envelope at the front desk.

Here, Andre and Rhonda go very separate ways. He stays at the hospital and receives “music therapy” — an excuse just to let Jennifer Hudson sing, methinks, because the scene is kinda jank — but then J.Hud’s therapist character is suddenly kneeling in between Andre’s thighs, her lips closer to his than yours would be to a spoon as you blow on hot soup to cool it down. But instead of an off-label therapy like wahh-chicka-wah-wah, she suggests… prayer?  “Dear God,” she says (just seconds after I was expecting a sexy “Oh, god!”) and that’s where we leave ’em.

Rhonda, meanwhile, now estranged from the man she loves, has nothing left to lose or to prove – and she takes it harder to Lucious than almost anyone other than Cookie this season. When he tries to dismiss her as an entitled country-club chick, she reminds him nothing in life has been handed to her — how does a guy who’s always seeking an edge know so precious little about his daughter-in-law? — and when she goes to sign the paperwork, she’s the only one who smells something rotten in, well, wherever Lucious’ mansion is located. (The Hamptons, maybe?) Andre’s cool 1 million shares are now only 750,000 — ditto for Jamal and Hakeem’s — and their A-shares are now just common Bs. (I can’t pretend to know what this means, but I trust Rhonda’s business school degree is on-point.)

Lucious claims he shorted his sons to benefit their mother — “I did it for you!” he tells an unimpressed Cookie — which is when Rhonda strikes a cobra-esque death blow to Lucious’ jugular. “How many shares did you personally give up?” Before he can answer — duh, it’s obviously none — the scene is interrupted by the arrival of Vernon (with Olivia, Reg and the subsequent death-by-handgun insanity yet to come). 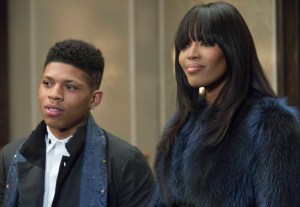 “BYE, CAMILLA” “BYE, OLIVIA” | Camilla tries to make a boss move by showing up on IPO night, introducing Hakeem’s new song “Age Ain’t Nothin’ but a Number” and selling their April-October romance to the family as this generation’s Anthony and Cleopatra. “Y’all know that’s a tragedy where they end up dying,” offers Jamal, in the night’s most hilarious line.

Lucious, though, doesn’t see Camilla as part of his son’s brand — and having investigated her currently bleak financial picture — tries to pay her off to exit his son’s life. When she balks and walks, he hits the remote “door lock” button — a deeply disturbing gesture considering they’re all alone in a very big mansion — and huffs, “I didn’t say you were dismissed.” Camilla relents and agrees to head back London — but not before she tears up Lucious’ check. Yoko may want to play the tambourine, but she’s not playing games with Hakeem’s heart, after all!

As she exits, Camilla points out Lucious’ grim medical diagnosis — and promises she’ll be back in Hakeem’s life once the old man passes away. “He will forget you within a month,” sneers Lucious, thinking he’s scored match point. But Camilla — clearly sharper with a retort after her run-in with Cookie — has the last word this time: “And in six months, you’ll be rotting in a wheelchair like a vegetable with a colostomy bag trailing behind you.” That hit harder than a cellphone to an assitant’s head, yo!

Olivia also exits for parts unknown — and takes Lola with her — at episode’s end. She came to Jamal because she knew her sham of an ex-hubby was a good guy who’d step up — even though she’s pretty sure it’s Lucious, not him, who’s Lola’s bio-dad. (HAVE NONE OF YOU HEARD OF DNA TESTING?) Cookie, whose capacity to love, empathize with and forgive the players on the Empire Entertainment chessboard appears to be growing each week, sends Olivia off with words that really hit home: “You left your baby to save her — there’s nothing harder than that.” 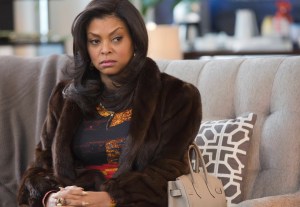 IN OTHER NEWS… |  With Lucious unable to forgive Vernon’s collusion with Andre, the Empire chief’s right-hand man relapses into a messy pool of drugs and alcohol. Will his unraveling spell doom for the IPO efforts — or even Lucious’ freedom?

Cookie and Malcolm, meanwhile, finally hook up — seconds after he tells her he can’t. (So much for will power… Mmmmmkay?) Meanwhile, it’s clear Lucious is angling for a reunion with his ex-wife — especially with Boo Boo Kitty out of the picture. (Anyone else miss Anika this week?)

Cookie, though, is all about the new man in her life. When Lucious coos, “Whatever Cookie wants,” she looks almost aghast: “I want you to be a better father,” she says, detonating the kind of truth bomb he just can’t handle.

And at the end of the hour, after she tells Malcolm, “Take me somewhere. I want to be alone with you,” it’s clear that Lucious’ repeated betrayals of his family have caused her to lose that loving feeling. She tells her ex that, yes, she’d had a fantasy they’d reunite when she got out of prison, but now her eyes are wide open. In fact, she sneers before exiting the room with a sly grin, she’s figured out Lucious’ main motivation for pursuing her is this: “You just don’t wanna die alone.”

What did you think of this week’s Empire? How do you think it’s setting up next week’s finale? Stay tuned to TVLine tomorrow for my Q&A with Jussie Smollett — you will love it, I promise — and until then, share your thoughts in the comments!