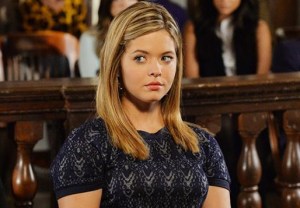 Tuesday’s Pretty Little Liars marked the beginning of Mona’s murder trial, and although Alison wasn’t found guilty (…yet), another member of the DiLaurentis family was forced to face the music.

I’m talking about Jason, whose little tryst with Hanna’s mom (#JashleyForever!) has become a matter of public record, thanks to “A” tipping off the prosecution. Now the jury thinks Jason only rescinded his initial statement about the killer looking like Alison at Ashley “Good Time” Marin’s request — because we all know she’s a huge fan of Ali’s. (Seriously, did no one send DVDs of Seasons 1-4 to Mona’s lawyers? It’s called research, people!)

There might still be hope for Alison, though, assuming that note the girls found in Mona’s room proves useful. After hearing the creepy French song playing in the Vanderwaals’ house, they took it upon themselves to go inside — even though it was obvious no one was home — and rummage through Mona’s room for clues. Despite “A” attempting to throw them off course, here’s what they found inside one of Mona’s mirrors:

Feel free to decipher that on your own (Update: reader Alyse has pointed out that each line is an anagram for “Charles DiLaurentis”!) while I focus my concern on Andrew. What was he doing outside Mona’s house while the girls were inside? And did he throw that screwdriver through the window to make it appear as though the girls broke into the house?

I’m suddenly getting the feeling that Alison isn’t the only liar who should be worried about hearing a guilty verdict next week.

DISENGAGED? | Meanwhile, the jury’s still out on how the trial’s big revelation will affect Ashley and Ted’s engagement. For some reason, she seemed insistent on calling things off — like, she wasn’t even going to let him finish his damn coffee — despite her ever-forgiving pastor fiancé refused to break his promise. (Does anyone else think she wanted this out? Maybe Mama Marin just wants to play another game of one-on-one.)

WTF, ANDREW? | Actually, let’s back up to Andrew for a second: He and Aria finally came face-to-face for the first time since their big kiss a few weeks ago, but they didn’t exactly talk about locking lips. Instead, Andrew confessed that he’s tired of the whole school “memorializing Mona,” adding that she was “vicious” and suggesting that the world might be better off without her. He later attempted to clarify his comments, but he still came off looking shady as hell. (Also, re: this tweet, I’ve changed my stance.)

* I’m not really sure where else to put this, so I’ll just leave it here: I loved when Spencer suggested they bottle Caleb and sell it as the “Essence of Best Boyfriend.” Someone please let me know the second that goes on sale.

PLL fans, how are you feeling about Ali’s trial? Are you, like me, assuming the liars will end up going down with her? And what’s up with Andrew (like, every aspect of him)? Drop a comment with your thoughts and theories below.