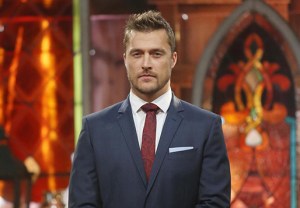 The rules of Thunderdome? Yes — but also the rules of The Bachelor‘s season finale, which on Monday found farmer Chris Soules choosing either Becca (The Virgin) or Whitney (The Babymaker) as his One True (and On-Camera) Love.

After two hours of agonizing over the decision before him, the Arlington, Iowa, native picked fertility nurse (and big-city resident) Whitney as the girl with whom he’d most like to appear on tabloid covers. And once Becca was set out on the curb for recycling (perhaps on Bachelor in Paradise?), he put a ring on Whitney.

But let’s be honest with ourselves: Finding out who Chris chooses is a lot like watching the ball drop on New Year’s Rockin’ Eve. It’s technically the moment we’re all waiting for, but the journey ultimately becomes a lot more fun than the destination.

With that said, let’s break down the most watercooler-worthy moments from The Bachelor‘s final hours:

* Prince Farming brings both ladies home to meet his family in Arlington, and maybe it’s just because Whitney visits first, but the entire Soules clan is immediately head over heels for her. You know that moment in Looney Tunes when Pepé Le Pew’s heart beats out of his chest? That’s how Chris’ family reacts to everything Whitney says, even when she admits in front of small children that she and Chris “made a baby” in the fertility lab. When she delivers a teary-eyed toast at the dinner table that night, you can practically hear the sweeping violins in the background. Meanwhile, after Becca’s visit, the family is left feeling ambivalent about Becca’s hesitation to uproot her entire life for a man she doesn’t yet love. Whitney: 1; Becca: 0

* When Chris’ family asks him to describe how Becca is different from Whitney, he can only come up with, “She’s got great qualities,” which include a good head on her shoulders and a concrete knowledge of what she wants in life. Romantic? Not really. Awkward? Very. But just when things are looking especially grim for Becca, Chris admits, “I know what I feel, and that’s more important to me than what she’s saying.” Whitney: 1; Becca: 1 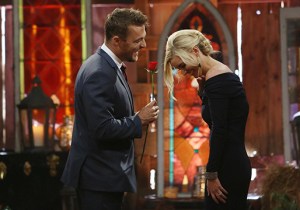 * Chris’ last-chance dates with the girls are wildly different. On one hand, Chris takes Whitney to his farm so they can harvest corn together — not a euphemism. (And I do believe no one has ever been so excited to harvest corn as Whitney.) On the other hand, Becca’s final date with Chris consists of a loooooong conversation in which she is unable to express what she really wants out of life — and, more importantly, her relationship with Chris — right now. Whitney: 2; Becca: 1

* When it comes time for Chris to make His Big Decision, his rejection of Becca goes about as smoothly as one could hope. In other words, I’m not so sure Becca knows she was rejected. But there’s no time to dwell on that: While Becca is left to make awkward eye contact with a cameraman in the backseat of her limo, Chris pops the question to Whitney — a proposal she eagerly accepts.

* And let’s not forget the After the Final Rose special, which didn’t feature any Jason-dumping-Melissa-for-Molly-level drama, but wasn’t without highlights in its own right. For one, the always-memorable Ashley S. insinuated she’ll be on the next season of Bachelor in Paradise — if you can take a sentence like, “Yeah… I suppose I might be there…” to mean she’ll be part of the cast.

OK, your turn. Did Chris make the right choice in Whitney? Cast your vote in our poll below, then hit the comments with your thoughts on the finale!