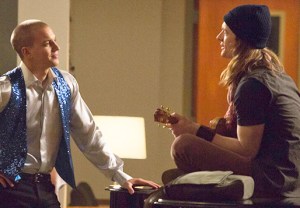 Last week’s Glee killed two birds with one stone by introducing Finneas O’Connell as Alistair, a much-needed boost for the New Directions’ dwindling numbers and a long-overdue love interest for this season’s “post-modern gay teen” Spencer.

TVLine spoke with O’Connell about his experience infiltrating Glee in its final hours, what the future might hold for Spencer and Alistair, and how Darren Criss’ original song “Rise” snuck its way into tonight’s episode (Fox, 9/8c).

TVLINE | Had you been keeping up with the show, or did you need to play catch-up when they cast you?
I’d been keeping up, semi-vicariously through my sister, who’s a huge Glee fan. She was so jealous when I got the part and got to go to set. Your little sister never thinks you’re cool, but I think she actually thought I was a little cool for doing this. 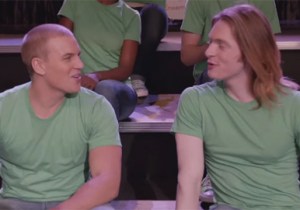 TVLINE | Spencer and Alistair’s relationship feels really natural. What works about them as a couple, and what will we see from them in the coming weeks?
My favorite thing about it is that it’s written as a very understated gay relationship. Glee‘s been such a flagship for televising homosexuality, and I love how it’s changed over the course of six years. In Season 1, we had Kurt coming out to his dad, which was such a big deal. then his relationship with Blaine was kind of controversial — but by the sixth season, there’s this character Spencer who’s character-driven and just happens to be gay. The fact that he’s gay isn’t made into a big deal, so he and Alistair are kind of just having a normal high-school romance. They just like each other; it doesn’t center around the fact that they’re gay.

TVLINE | And Darren Criss wrote a song, “Rise,” that you guys perform this week, right?
I’ve had that song stuck in my head for a week, it’s that catchy. … We don’t get our scripts until the last minute, so we started filming [Friday’s episode] the day after it was given to us, and we were only given the first act because that’s all they’d finished when we started. The first scene we filmed was one where Darren Criss has a speech about how it’s OK that the Warblers’ school burned down because, like a phoenix, they’re going to rise from the ashes. And he’d written this song “Rise” a couple of years ago, so he was like, “Wait, this reminds me of that song I wrote.” So I think he played it for the producers, and they were like, “This sounds exactly like what we’re trying to say.” Glee‘s whole process is full of moments like that. 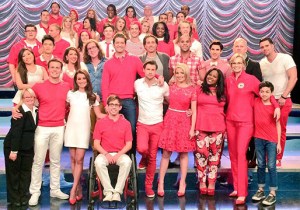 TVLINE | I see you in that big group photo from the finale. What was it like performing with so many former cast members?
[Laughs] It kind of felt like being someone’s date to their high school reunion. There were all these people I’d seen before, and everyone else had talked about, but I was so new. I tried to go up to every person I hadn’t met and be like, “Hi, I’m Finneas. You’re awesome.”

TVLINE | As much as you can say, what are your thoughts on the ending of the finale? Will fans be satisfied?
I was really moved by the final episode when I read it for the first time, I hope everyone feels as satisfied as I did. As a fan, it just feels really conclusive; it makes a lot of sense and really wraps things up. There’s also a little time-jumping, some stuff going on in the future, so you can see where everybody ends up.

Glee fans… Your thoughts on Spencer and Alistair’s budding romance? Your hopes for the series finale? Drop ’em all in the comments section below.