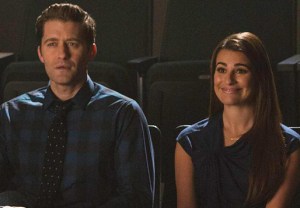 There are truly no words to describe what went down on Friday’s Glee, but these two are a good start: Oy. Vey.

The New Directions were forced to perform at the bar mitzvah of a spoiled tween (who also happens to be the superintendent’s nephew) named Myron Muskovitz, a pint-sized nightmare dressed head-to-toe in gold, sequins and, of course, pure evil.

Despite a few bumps in the road — Myron pooped himself and had to borrow a pair of Kitty’s panties, for example — the bar mitzvah was a relative success, and the New Directions were glad to finally be rid of the tiny terror when all was said and done… so they were understandably irked when they learned that Myron’s uncle had strong-armed his middle school into letting him graduate early, thus making him New Directions’ latest gleek. 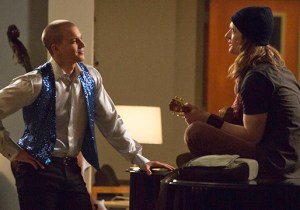 THE GAME | Meanwhile, Glee‘s new “post-modern gay teen” Spencer developed a crush on Roderick’s friend Alistair, but after discovering that his own flirting skills are less than stellar — he really is perfect on mute, though — Spencer asked “Hot Rod” to help him out. In exchange, Spencer volunteered to help Roderick master the ropes in gym class, but as expected, he ended being “the wrong kind of dick” and making it worse. It wasn’t until Myron got trapped in his faberge performance pod that Roderick was able to muster the strength to climb the auditorium ropes to save him; as Spencer explained, in a crisis, “even babies can lift cars.” As for Spencer, he didn’t just get the guy — he also sealed it with a kiss.

SIBLING RIVALRY | Mason and Madison updated their proverbial Facebook status to “it’s complicated” this week, as Mason’s budding crush on Jane threatened to destroy their already unstable relationship as siblings. But thanks to Mason’s (rather on-the-nose) performance of Queen’s “I Want to Break Free” at Myron’s bar mitzvah, his sister finally realized the error of her insane, controlling ways and gave him her blessing.

I’m afraid to ask, but… Glee fans, what did you think of this week’s episode? Are you happy for Spencer and Alistair? Jazzed about the glee clubs’ newest additions? Or are you going to try to pretend this whole episode was one big fever dream? (It is flu season, you know!) Drop a comment with your review of the episode below.