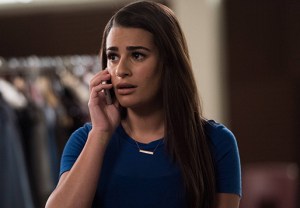 Sue Sylvester suffered the most crushing setback of her career on Friday’s Glee, but like a majestic phoenix (with hepatitis), she rose from the ashes to claim an even loftier throne.

It all began when a scorned Becky exposed Sue’s hurt locker to the superintendent, thus revealing her many twisted ambitions — her Klaine reunion blueprints seemed even crazier from an outsider’s perspective — and getting her fired from McKinley. This forced the once-great Ms. Sylvester to go where all disgraced lunatics inevitably turn up when they have something to say: Fox News.

Despite promising a fair and balanced interview, Celebrity Apprentice runner-up Geraldo Rivera put Sue through the ringer in a live primetime special, getting shadows from her past — including everyone’s favorite Christian caveman, Joe Hart — to testify to her insanity. He even got Michael Bolton to denounce her as the mother of his child! (Follow-up question: Is it weird that, until now, I actually believed he impregnated her? I’m far too trusting.)

But rather than admit defeat, Sue struck a deal with the occasionally accented leader of Vocal Adrenaline to become the group’s new coach, before schooling Will in a “psychopathic” rendition of Europe’s “The Final Countdown.” (Also, did Sue really perform “The Trolley Song” with Carol Burnett? I have a rare condition in which I hallucinate entire musical numbers, so I’m just checking to make sure it really happened.)

TWO BECOME ONE | Over at McKinley High, the New Directions were forced to merge with the Warblers after Dalton Academy suddenly burned to the ground — a fact Will apparently wasn’t aware of until Blaine mentioned it in passing. (Seriously, how was that the first he heard of the fire? I’m beginning to think he’s living in that auditorium.) Anyway… After a bit of resistance on both ends, the two groups were able to come together in song — and in style — for a performance of “Rise,” the original Darren Criss tune we told you about earlier today. (I have to admit, though, I was a little bummed not to get more of the new kids this week, especially after last week’s episode finally got me to care about them.)

DECISIONS, DECISIONS | After landing a part in Russell Simmons’ new musical — an audition she “forgot” about for some reason — Rachel thought her future was set… until she got a call from NYADA informing her that, despite Madame Tibideaux’s initial hesitation, she was welcome to resume her education in New York. That’s where things got a little messy. Everyone supported Rachel’s decision to choose the play over her education, except for Sam, who insisted that she reconsider and not “make the same mistakes all over again.” And because we all know Rachel loves being told what to do, this sparked a bit of a lover’s quarrel between them, one which wasn’t resolved by the episode’s conclusion. (Could the end of Samchel be nigh?)

Glee fans, with only two episodes left, how do you hope all this drama plays out? Should Rachel choose NYADA or Broadway? And are you worried about her future with Sam? Drop a comment with your thoughts and theories below.