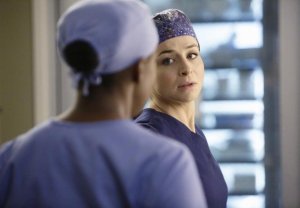 In this week’s Grey’s Anatomy, Amelia operated on Herman’s brain tumor. And operated on it. And then operated on it some more. But were both the surgeon and her patient able to go “The Distance” of the episode’s title? Read on and find out!

KNIFE OR DEATH | As the hour opened, Amelia was steeling herself for what was to come, taking a moment to cry out a few nerves in the bathroom before psyching herself back up to do battle with Herman’s tumor. “A surgeon must always be prepared to lose,” she said in her voiceover, but “never fail. And the only way to to fail is not to fight.” And fight, she would. By the time Stephanie joined her outside the OR, Amelia had assumed a Wonder Woman posture. “I’m being a hero,” she explained. So Stephanie did it, too. (Whatever works.)

Before Amelia had even injected the dye into Herman’s brain, the gallery was full of spectators. (Mer insisted to Maggie that it wasn’t like watching a movie of a stressful moment in a colleague’s life, but… well, she had brought snacks and knew exactly when “the good part” was starting. April turned up, too, and seemed to be doing pretty well.) Stephanie was supposed to have another resident take her place after a certain number of hours, but since Amelia wasn’t being spelled at any point, Edwards wouldn’t tap out, either. (Well, not willingly.)

In time, Amelia froze. Literally froze. She was trapped in Herman’s head, unable to make a move without inadvertently snipping out a part of what made Nicole Nicole. When Richard came in and asked if he could help in any way, Amelia said that she had bitten off more than she could chew (“My hubris is going to kill her”) and begged him to get Derek on a plane, stat. Instead of doing so, Richard reassured her that she – and only she, for that matter – knew how to execute the complicated plan she’d laid out. Off his pep talk, she got back to work and – hurrah! – cleared the optic nerve.

After Stephanie collapsed from exhaustion (at the 13-hour mark) and Mer scrubbed in, Amelia discovered just how difficult it was to work while wearing thick gloves to protect her from radiation. So, to Owen’s horror, she removed them, making the procedure easier but also risking illness and halving her exposure time. (She got the job done, though.) When Stephanie awakened, Amelia let her close up the patient’s head (under Mer’s supervision), then sank into an emotional heap on the floor of the hall.

NOBODY’S UNDERSTUDY | Meanwhile, Arizona took over for her mentor on the tricky case of Glenda — you remember, the pregnant widow of the patient that Bailey lost. Naturally, Miranda was (to put it mildly) upset that Herman wouldn’t be treating Glenda herself, but hey, Nicole was a little tied up, ya know? And though Arizona assured Bailey, “You want [Herman’s] hands, you have them, right here,” Miranda second-guessed her skills and called in Alex to deliver the baby. When he arrived, however, Arizona proved that she’d learned more than technique from Herman by standing up to Bailey and miraculously getting her to fall in line. Just as impressive? Robbins saved both the baby (without delivering it) and the mother. So there.

Afterward, Arizona took Glenda’s notecard off of her and Herman’s bulletin board and recalled one of her last conversations with her mentor. “I knew I’d picked the right horse when I picked you,” Herman told her. When Callie came in to give her ex an update on Amelia’s progress, Arizona said that she knew Nicole had done what she wanted to with her. “She’s in my head,” she marveled, then broke into tears, “but I’m not ready for my head to be the only place she exists.”

A PARTIAL VICTORY | The following day, Amelia was reviewing and reviewing her work, snapping at Owen and wondering why Herman had yet to wake up. Finally, Stephanie noticed something in a scan – the patient had had a stroke at some point during the marathon procedure. (Uh-oh.) Fearing the worst, Arizona wondered how she would do for Herman what Callie had once done for Mark. “I can’t do this by myself,” Robbins cried. To which Callie responded that she wouldn’t have to – she wasn’t alone. Then, at last, Herman woke up. “Mommy?” she said to Amelia. “Is that you, Mommy?” And at first, it seemed like she was 100 percent her same old snarky self. But, when she was alone with Arizona, she admitted what Robbins suspected – she was completely blind. However, she hastened to add that she was alive because Arizona had been such a pain in her ass. So she got to reiterate that she had picked the right horse (and Arizona got to object again to being called a horse.)

OK, your turn. What did you think of the episode? Were you relieved that Herman lived? Happy with the Calzona moments? Hit the comments!