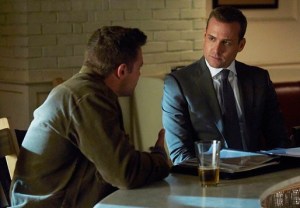 To bring out the can opener or not?

An early version of last week’s Suits found would-be couple Harvey and Donna going back to their old celebratory ritual and opening a whole new can of worms — by sleeping together again, executive producer Aaron Korsh tells TVLine.

Instead of the old wahh-chicka-wahh, however, the show’s writers chose to have Harvey tell his secretary that he loves her. Now the question looms: Did he mean it in a romantic sense?

“I did not view it as Harvey confessing that he’s in love with Donna,” Korsh admits.

Still, this Wednesday’s season finale (USA Network, 10/9c) promises to bring the pair’s relationship to head while also introducing a long-awaited brother and a new obstacle for Mike and Rachel, the EP previews.

Bonus: We’ve got a sneak peek video at the end of this post unveiling Harvey and Donna’s flashback meet-cute!

TVLINE | The show has been teasing the Donna/Harvey relationship for a while now, but it’s always been very slow and subtle. What made you decide to take this big leap forward and bring their feelings to the surface in a more overt way?
The idea was floated of them sleeping together. We actually looked into it, and it turned out that the way the stories were coming together, it didn’t seem believable. We thought about having them sleep together in the heat of Donna thinking she was going to go to jail, but we didn’t feel like we had earned it enough in the story at that point. We also thought if they sleep together and then Harvey doesn’t want to follow through on his feelings, boy, we’re going to hate him. So we ended up splitting the difference. … We wanted to focus a little bit more on Donna. Usually, at some point in every season, we do some sort of a heavier focus on each one of the characters, and Donna hadn’t had her turn yet. So she had the big thing in [Episode] 14 and that led to her being in jeopardy in [Episode] 15. Then we’re thinking, “OK, if she is in jeopardy, what does that do to Harvey? And then ultimately, what does that do to the two of them?” Sometimes in crisis, people’s relationships come out.

TVLINE | What kind of fallout can we expect from Harvey’s confession?
Well, I will say I don’t view it as Harvey’s confession. Different people are viewing it in different ways. There was a moment they might have slept together. They had a moment in there. Nothing happened. Donna says, “Why?” Harvey says, “You know why,” meaning he doesn’t want to take it to that other level. Harvey was jealous of Stephen, and he said, “Just because I don’t want a relationship with you doesn’t mean I can’t be jealous of another guy with you.” So Harvey wasn’t confessing his deep-seeded love to Donna, in my opinion.

TVLINE | Marcus is also in this episode. What are we going to be seeing in terms of Harvey’s brother?
It’s been a long time coming to meet Harvey’s brother. We’ve set him up a lot. We’re going to meet him in an interesting context where we find out a lot about the relationship of the two brothers. Marcus is, obviously, Harvey’s younger brother. And we meet him in the context of a flashback [when] at a pivotal time in their lives, Marcus needed a favor from Harvey and Harvey came through for him. In the course of that, we get a little bit more backstory about mom and both of their points of view on mom and what she did. 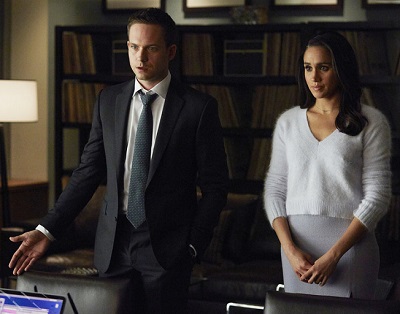 TVLINE | And what’s ahead for Mike and Rachel?
We explore Rachel’s conundrum regarding where she is in the firm now that Mike is back in the firm. She’s been going to law school, but also part-time [working as] Harvey’s associate. Ever since Mike [came] back, kind of unspoken, Harvey has defaulted to Mike and that comes up in the context of this last episode. Mike and Rachel, together, work through that. In the course of it, they work well together and they grow closer.