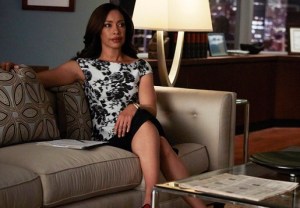 Jessica and Jeff’s romance on USA Network’s Suits screeched to a resounding halt last week. But the heartache and anxiety isn’t over for Pearson Specter Litt’s top boss lady.

Now that Jeff is aware that his ex wasn’t completely honest with him about how Louis got name partnership, he’s going to have to make a choice that will directly impact Jessica, personally and professionally.

“He knows that there’s something going on,” star Gina Torres previews. “He can either decide he can go after the truth on his own or he’s going to say, ‘You know what? Maybe she’s just not worth it.'” As Jeff makes his move, Jessica will need to make a hard decision of her own about what she wants for her romantic future, Torres reveals below.

The actress also talks about the arrival of Jessica’s truth-spilling sister in Wednesday’s installment (USA Network, 10/9c), the Firefly pal she’d like to work with again and the future of her tortured, terminally ill Hannibal character.

TVLINE | Is Jessica going to get a chance to actually tell Jeff the truth?
Why would I tell you that? That would be a big, big spoiler, don’t you think? [Laughs] Clearly, she wants to. There’s a reason why she didn’t tell him the truth in the first place. It’s a big, big deal. It’s not just, “Oh, hey, honey, this is what happened at the office a few years ago.” I would expose him. I would expose him to all the shite I’ve exposed everybody else to. That puts him and his career in danger. The secret that she’s keeping has a lot of tentacles attached to it. He doesn’t know that she’s trying to protect him, not just herself and not just her firm — and he won’t know that unless she tells him. By then, it’s really pretty late. He doesn’t have a choice. 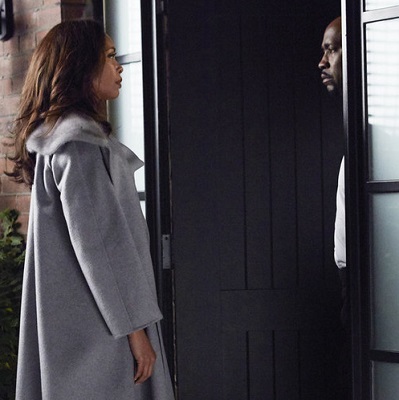 TVLINE | Is Jessica a little bit scared in this situation?
I think so. I think she’s felt like there’s a lot at risk, for quite some time, ever since the truth was revealed to her. So of course she’s scared here. [Jeff] is kind of Dudley Do-Right in a lot of ways. She’s not quite sure if his ire and his disappointment is going to push him the direction of making it right and string everybody up in the name of justice. It’s the same thing that we were all concerned about with Louis. The thing with Louis is his ego got the best of him, what he wanted got the best of him. So as much as he wanted to string everybody up, he wanted to belong to the club a little bit more.

TVLINE | Is this a relationship that can be salvaged? Do you see a future for Jessica and Jeff?
I don’t know. I really don’t. As much as she plays in the grey area, she’s also a survivor. She has to pick and choose who she trusts and who she’s going to share her life with. Jeff has a lot of questions, and Jeff is very demanding of her. Some things he’s absolutely in the right to be [asking about] because you’re talking about an interpersonal relationship and you have to be transparent for those things. But the way that she lives her life doesn’t exactly lend itself to that. So she’s got to ask herself the hard question: If not with Jeff, then with who? And what does she see for herself in terms of a relationship in the long run?

TVLINE | How has it been for you finally getting to have a romantic storyline on the show?
I was very happy for Jessica that there was going to be somebody there that loved her! [Laughs] That saw her as a woman first, not just a sparring partner, not just the institution that is Jessica Pearson, not somebody to be afraid of. That’s what was wonderful about Jeff – he saw her as a woman and not a threat or a chess piece to move out of the way.

TVLINE | And in the next episode, we’re going to meet her sister (played by Sons of Anarchy‘s Merle Dandridge).
We do! Yea! She has family! How exciting is that? I was happy to see that.

TVLINE | What is the relationship like between the sisters?
We have one scene together, and it’s sisters. [Laughs] Sisters tell each other the truth as only sisters can. I think it’ll be nice for the audience to see that.

TVLINE | Were there things that you learned about Jessica through her sister being introduced that surprised you?
There is more clarity given to what drives Jessica. You get more of a peek into how they grew up and how they were raised. So it’s truly no big surprise as to how they turned out, why Jessica is the way that she is.

TVLINE | Donna has done something that has put herself and potentially the firm in danger. Is there tension between her and Jessica as a result?
In the next episode, I don’t think it fully unravels; Jessica’s dealing with her own issues right now. That whole thing that’s happening with Donna, I know Harvey and Donna and Mike are mobbed up in that one together, and then Jessica finds out about it later. 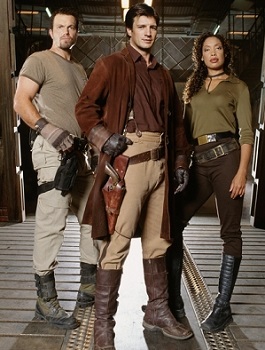 TVLINE | You’ve had some really great guest stars over the seasons. Is there anyone from one your previous projects you’d like to see come on the show? Maybe someone from Firefly?
Oh, see, you’re an undercover Browncoat, aren’t you? [Laughs] I would love to see the entire cast of Firefly on Suits. Just one right after the other. Just bring them on! I love those guys. I would love to work with them again.

TVLINE | And finally, is there any hope of seeing more of your character, Bella, on Hannibal?
That one you’re just going to have to wait and see. I do come back in [Season] 3.

Suits fans, are you rooting for Jessica and Jeff? And which Firefly vet would you most like to see guest-star on the USA Network drama?