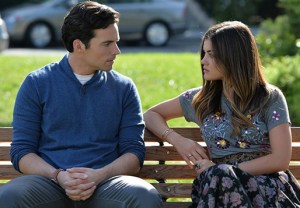 Fresh off last week’s controversial lip lock, Aria found a romantic little note from Andrew in her locker on Tuesday’s Pretty Little Liars, prompting her to share the big secret with Emily — who was surprisingly judgmental for someone who’s currently dating a married woman (but whatever).

Of course, Aria’s first confession wasn’t nearly as devastating as her second; she sat Ezra down and told him that she wants to be single when she goes off to college in the fall, something he was expecting — but not at all prepared — to hear from her.

So, is this really the #EndOfEzria, as ABC Family’s suggested hashtag would have us believe? Or is this merely another temporary breakup for the show’s OTP? 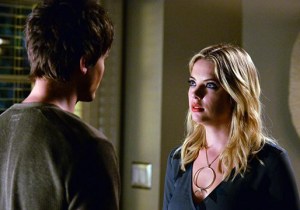 BLONDES BEHIND BARS | For a while now — let’s say for the past 116 episodes — I’ve wondered, “Why don’t these girls just tell the police about ‘A’?” Well, me screaming at my TV finally paid off this week, because Caleb suggested Hanna come clean to avoid going to jail for Mona’s murder; and while Hana still ended up behind bars at the end of the hour, at least I finally got my answer:

When she tried to show “A”‘s texts to the authorities, someone hacked into her phone and wiped it clean! Such a crafty little minx, that one. (Oh, and did Hanna’s mom really need to ask her about “A”? Doesn’t Ashley know the murder rate in this town?! She’s got a wedding to plan, damn it!) 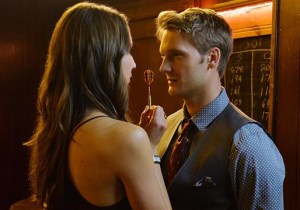 SECRETS AND GUYS | OK, let’s talk about Spencer and Colin now. Besides remaining arguably too British for his own good — he’s like a robot, programmed to only communicate with words like “flat” and “mate” and “hot toddy” — Colin also remained very hot for a certain Hastings sister. A night out to a bad Shakespeare play, followed by a few “pints” at the bar led to an evening of heavy petting back at his place. (Despite her success, Spencer could use a few dating pointers. Like, you’re out drinking with a cute guy! Stop talking about Hamlet!)

Anyway, Spencer was in for a rude awakening the following morning when she learned that Melissa and their mom lied about getting her an interview at St. Andrews; they really just wanted to keep her in London where she’d be safe. (Wait, Melissa lied about something? To her sister?! Trust me, I’m just as shocked as you are.)

PLL fans, what did you think of this week’s episode? Is Ezria really done for good? Did Spencer overreact with Melissa? Plus, with only two more episodes until the big “A” reveal, any new theories? Drop a comment with your thoughts below.