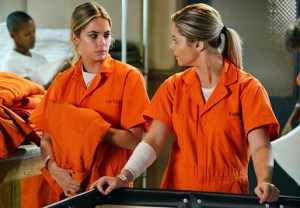 Something tells us Hanna Marin does not agree that orange is the new black.

New photos from Pretty Little Liars‘ March 10 episode have hit the web, revealing that — spoiler alert — the universe doesn’t exactly work in Hanna’s favor when Alison goes on trial for murder, unless Hanna wants to slip into a jumpsuit and perform manual labor alongside her best frenemy.

But wait, it gets crazier…

This new batch of shots also includes a few pictures of Aria and Andrew, and unless I’m jumping to wild conclusions — which my therapist has certainly accused me of doing in the past — it looks like there might be sparks between them!

And this is all leading up to the reveal of “Big A” on the March 24 season finale.

Browse the new PLL photos below, then drop a comment: Do you sense an Aria-Andrew connection? And who’s your (final) guess for the identity of ‘Big A’?