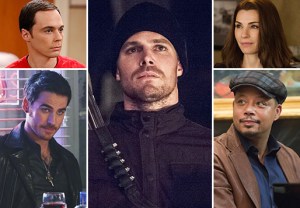 Question: Any Big Bang Theory scoop? —Alexandra
Ausiello: Extending its love affair with all things Stars and Warsy, the CBS smash will be sending Leonard and Sheldon on a road trip in early April to Marin, Calif., home of the sprawling and heavily fortified Skywalker Ranch. Their goal? To pay its owner, George Lucas, a house call. In related news, EP Bill Prady just tweeted a first look at their trip.

Question: Anything cool coming up on Arrow? —Julie
Ausiello: The show’s Season 3 finale will introduce a major, formidable, fierce new foe for Oliver, and his reign of terror will continue well into Season 4. The mysterious character is being referred to internally as “Damian Dark,” which got Matt Mitovich and I (but mostly MM) pulling up and skimming the Wiki page of one Damian Wayne. Get it? Damian Wayne. Son of the Dark Knight. They’d probably have to tweak the Bruce Wayne connection, but it’s a plausible theory, no? UPDATE: Readers better-schooled than Matt Mitovich and I (but mostly MM) notes that Damien Darhk is a H.I.V.E. operative per DC lore, and thus is more likely to be introduced.

Question: Are we going to see ATF Agent Zoe Keates again on NCIS? I really like her and actress Marisol Nichols! —Lori
Ausiello: As a matter of fact… yes, I can confirm that 24 alum Nichols will again reprise her role as DiNozzo’s former colleague, in an episode airing this spring. 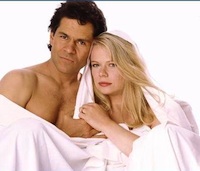 Question: Any new scoop on NCIS? —Marsha
Ausiello: How about another casting tidbit — and this one’s near and dear to my heart. A Martinez, former star of Santa Barbara, TV’s greatest soap ever and one of my favorite shows ever, will guest-star in a late March episode titled “Patience.” Says EP Gary Glasberg of the ep: “It deals with the mystery surrounding a decades-old airport bombing. When new evidence surfaces, the NCIS team follows a cold clue trail that turns red hot. We were thrilled when A took the role of Orlando. His South American-based character is full of surprises and brings some real twists and turns to the investigation.” Eden and Cruz, forevah!

Question: There are rumors going around that the sixth season of Downton Abbey will be its last. Do you have any concrete scoop on this? —Kristen
Ausiello: The actors’ contracts expire at the end of Season 6 and, save for one or two possible exceptions, they want outta there (with Maggie Smith leading the charge). So, short of them being offered $1 million an episode, the show’s done after one more “series” (as they say across the pond).

Question: Anything on Grimm? —Thomas
Ausiello: I hear that the NBC drama is mulling going dark — really, really dark — as it approaches season’s end. Gruesome dark. Death-of-a-major-character dark. (Fill the comments with your guesses on who it might be.)

Question: Will we be seeing more of Chris Noth on The Good Wife this season? —Marilyn
Ausiello: I think Noth’s airtime will increase significantly this spring when, as rumor has it, the show revisits a Peter-centric storyline chad that’s been dangling for more than a year. (Read between the puns, people!)

Question: Do you have any scoop on The Good Wife? —Elizabeth
Ausiello: Remember how the Jan. 11 episode ended with an outraged Alicia confronting Diane and Cary about hiring David Lee, without consulting her first? That won’t be the last of the bad vibes percolating at Florrick-Agos-Lockhart in the run-up to Election Day. “There is tension within the firm because Alicia has put everyone in an awkward position by being there and yet not there,” teases showrunner Michelle King. “They’re going to question what her motives are, because she may have other interests she needs to serve, not just the firm’s. That’s going to play out in the second half of the season.”

Question: Do you have any scoop on what’s going with Once Upon a Time’s Hook? —Jessica
Ausiello: Episode 15 (airing March 15) will reveal why the pirate has a quite complicated past with sea witch Ursula — and the nature of it is “far worse” than any romantic indiscretion, says co-creator Eddy Kitsis. “When you think about what would be worse than having your heart broken, I would say having your soul crushed. You’re going to see the entire flashback of what happened, with the origin of Ursula.”

Question: Is Once Upon a Time actually considering a Belle/Hook pairing or are they just keeping the two busy, while Rumple and Emma are busy with the Queens of Darkness? —Linda
Ausiello: No, no, no. They’re not hinting at a Belle/Hook pairing. Belle and Will Scarlett, however, may be a different story, as you’ll see teased this Sunday. As series co-creator Eddy Kitsis notes, Belle and Will, after all, have “a lot in common,” in that “they both fell in love with villains (Rumple and Wonderland’s Red Queen, respectively), and they both hoped that these villains would be redeemed.” And they both were let down. With Rumple banished (as far as Belle knows!) and Anastasia MIA, “Anytime you have your heart broken,” Kitsis says, “you look for a way to smile again.”

Question: Any Once Upon a Time scoop you can share about the infamous Cruella de Vil? –Mason
Ausiello: If you’re wondering how Cruella wound up in Long Island, N.Y. while her previous associates Rumplestiltskin and the Charmings landed in Storybrooke, Maine, co-creator Adam Horowitz promises that in an upcoming episode “all the pieces on the chessboard are laid out,” explaining “who wound up where and why.”

Question: Any news on Nicola Peltz returning to Bates Motel as Bradley, or is her character’s journey over? – Jarrod
Ausiello: The undead will rise again in Season 3. “Bradley is indeed coming back,” confirms EP Kerry Ehrin of the fugitive teen, who fled town after faking her suicide last season. “It’s a very interesting dilemma [because she is] a person who can’t be visible because she is wanted. She’s not supposed to be there. She’s gotten herself into sort of an awful, sad situation that she’s kind of just learned to live with. And she just wants to come back to see her home. But she can’t. It’s very isolating.”

Question: The synopsis for Agents of S.H.I.E.L.D. Episode 13 says that Cal assembles a team of super-villains. Any idea who they are? —Joseph
Ausiello: As revealed in our Season 2B preview, Cal rounds up other “misfits” on the Index who aren’t happy with S.H.I.E.L.D., including, EP Jeph Loeb says, Karla Faye Gideon, “a dark character” played by The Sopranos’ Drea de Matteo. As such, Coulson would be prudent to keep his guard up. Says Clark Gregg, “[Cal] is not so happy with how their last fight went,” interrupted as it was by daughter Skye/Daisy. “There’s a score he wants to settle.”

Question: On Sleepy Hollow, what is Grace Dixon? Is she a witch? —Reagan
Ausiello: Well, you’ll remember that Jenny and Abbie weren’t activated as witches when Henry rang the enchanted bell, leading us to believe that their colonial ancestor wasn’t part of the Pointy Hat Crew. But to be sure, we asked showrunner Mark Goffman to weigh in on the matter. “Grace was a keeper of witchcraft,” he says, couching his answer by saying that the magic she oversaw “could be of a different type” from the dark mojo Katrina practiced. “That’s something we can learn a lot more about in the future.”

Question: Can I have some Sleepy Hollow scoop, please? —Alexsandra
Ausiello: Remember when Moloch told Henry, “There were horsemen before you, there’ll be horsemen after” (or something to that effect)? Now that Henry is dead — and stripped of his Horseman of War status shortly before that — it’s likely that we’re back to only knowing who one of the four Horsemen of the Apocalypse are. We ran our theory by Goffman, who coyly replied, “That very well could be the case. I think that’s a very astute reading of Moloch’s comment.”

Question: Is it too early to ask for any spoilers for Season 2 of The Last Ship? –Heather
Ausiello: It’s never too early! (Except when it is.) That said, I have learned exclusively that Stephen Monroe Taylor (Anger Management, History’s upcoming Texas Rising mini) is set to recur during Season 2 of the TNT drama as Flea, a captured prisoner who has survived by weaseling his way into safe positions.

Question: Glee seems to be loading up on guest stars in its last few weeks. Any other big names on the way? —Kate
Ausiello: Well, Kate, we’ve already given you the scoop on Sue’s baby daddy Michael Bolton (via Jane Lynch, herself), but here’s one you might not know about: I’m told that Girls’ Andrew Rannells, who also starred in Ryan Murphy’s short-lived NBC sitcom The New Normal, is making an appearance in the series finale next month. He will be connected to Rachel’s storyline and he won’t be showing up in present-day Lima. Any theories?

Question: I cannot believe how hot Empire is. Please tell me that they know the gem they have in Taraji P. Henson’s Cookie, easily my favorite character! Oh, and if you have scoop on my new favorite show, that would be cool, too! —Phillip
Ausiello: Trust and believe that Fox knows the power of Cookie (and if they ever forget, we suspect Porsha will be collecting several hurled shoes in the network’s lobby.) Just don’t expect to see the Lady Lyon cooking up additional studio magic with the label’s comeback queen Elle Dallas anytime soon. A source tells us Courtney Love was only booked for two episodes — meaning Elle’s relapse at the hands of roofie-wielding Anika marked her final Season 1 appearance. BONUS SCOOP: We asked showrunner Ilene Chaiken if Lucious can truly rest easy in the wake of Vernon finding a stooge to take the fall for Bunky’s murder. “You can never rest easy on Empire!” she said with a hearty chuckle. Good thing Lucious’ ex is on the Empire payroll now — in case he needs a crash course on “How to Survive Your First Year in Prison.” 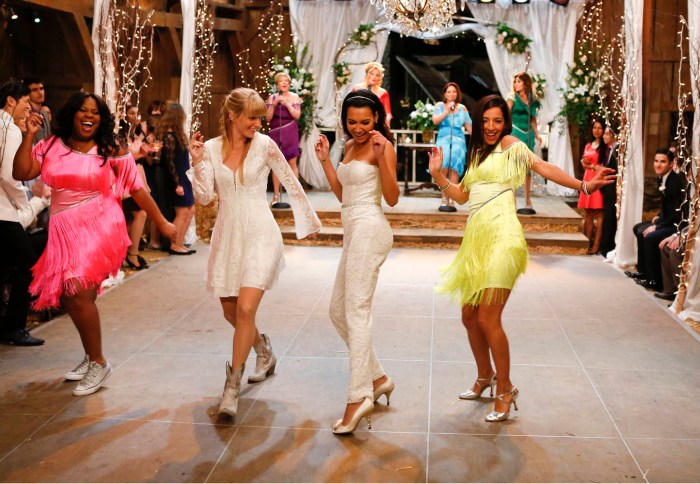