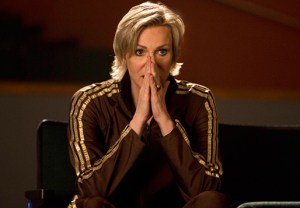 Glee will drop its curtain for the final time on March 20 (Fox, 8/7c) — but not before Sue Sylvester is (almost) reunited with her A-list baby daddy.

“Unfortunately, I don’t actually don’t have any scenes with Michael Bolton,” Lynch tells TVLine while in New York to promote her latest partnership with Febreze. “There’s an exposé done on Sue Sylvester, and he pops up on the screen to basically just say he has no idea who I am. That’s the father of my child!”

Speaking of uncertain connections, Lynch refuses to acknowledge the budding romance between Sam and Rachel. Perhaps speaking as Sue, she simply tells us, “There really is no Sam-Rachel relationship. I think they’re just friends. That’s all there is.” (Hmm…) 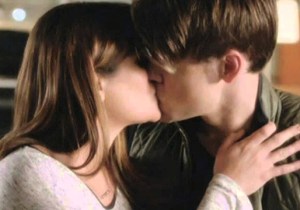 Of course, the future of Samchel (or lack thereof) will be confirmed in the series finale, which Lynch describes as “quite fitting.”

“It’s a great ending,” she says. “We jump five years ahead in the couple scenes of the last episode, so we’ll find out where all the kids are. Where Sue Sylvester ends up is pretty remarkable; I think people will really love it.”

As for Sue’s apparent softening this season — seriously, who expected her to be so accepting of Coach Sheldon Bieste? — Lynch believes it was a natural progression for her character.

“One of the things I realized early on playing her is that she’s your worst enemy, but she’s also your best advocate,” she says. “I think Sue kind of operates in those extremes.”

Glee fans, what are your hopes for the series’ final episodes? Your thoughts on Rachel and Sam? Drop ’em all in the comments section below.