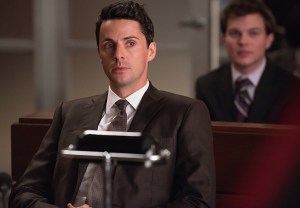 From courting Lady Mary to duking it out in civil court — Matthew Goode is a very busy man.

Fresh off his Downton Abbey debut during Sunday night’s Season 5 finale, the actor is back in modern-day duds — a rather fetching chocolate-colored suit, if we may be so bold — in a new set of photos from The Good Wife‘s March 15 installment (9/8c on CBS).

But Finn Polmar’s not sharing scenes with his partner-in-flirtation Alicia Florrick this time around. Instead, it looks like he’s teaming up in court with Alicia’s law partner Diane Lockhart (Christine Baranski) — and the results may spell trouble for Diane’s marriage to ballistic expert Kurt McVeigh (Gary Cole).

CBS’ official description for the episode, titled “False Feed,” is as follows: “When Frank Prady decides to go after Governor Florrick as a campaign tactic, Alicia is faced with the decision of whether or not to attack Peter’s record as well. Also, when Florrick/Agos/Lockhart take on the case of a man paralyzed by a malfunctioning gun created on a 3D printer, they call on Kurt to testify as an expert witness, which leads to a rift between Diane and her husband.”

Good Wife executive producer Robert King teased to TVLine last week that, “[What’s sexy] is when someone really knows they shouldn’t be doing something, but they find themselves riding towards the precipice. Julianna Margulies and Matthew Goode are amazing with that kind of tension. We lost Matthew for one or two episodes because of obligations, I think for Downton Abbey, but he’s in the rest of the season, and he’s fantastic.”

Also included in the gallery are pics from March 8’s “Mind’s Eye” — in which Michael J. Fox’s Louis Canning pressures Florrick/Agos/Lockhart to agree on a settlement in his wrongful eviction case against the firm.

Click through the gallery below for all that and more — then hit the comments with your thoughts!