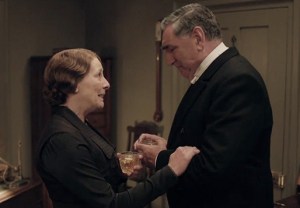 But let’s start with the only thing that really matters: Carson and Mrs. Hughes got engaged! And while I’m obviously over the damn moon about it, I have to admit I was surprised to see their relationship progress so quickly over the past few weeks. Remember how long it took them just to hold hands at the beach last season? (Not that it wasn’t still a super-hot moment, because it was.)

The only thing more fantastic than the engagement itself was the banter between Carson and Mrs. Hughes, beginning with him — while discussing their new joint venture — telling her, “I do want to be stuck with you,” which might be the least robotic thing he’s ever said. And then there was her response: “Of course I’ll marry you, you old booby. I thought you’d never ask!” Perfect, just perfect. 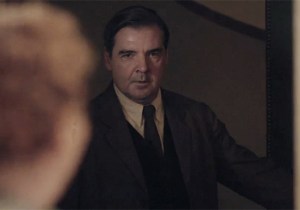 FREE AT LAST? | Confession: I’m not sure, legally, how it all worked out, but by the end of the finale, both Anna — who also revealed a violent history with her stepfather — and Bates had returned to Downton. Then again, I can’t possibly be alone in my confusion, considering this is the only real explanation we were given: “We’ll worry about the rest later. For now, let’s just have a very happy Christmas.” (Oh, OK. This is either straight-up denial on Bates’ part or the writers decided to throw the couple another bone. Either way, someone got away with killing Mr. Green. Well done, justice system.)

SCANDAL ROYALE | The Dowager Countess finally came face-to-face with Kuragin’s princess this week, and she turned out to be… what’s the exact opposite of a delight? Ah, yes, a total nightmare person. “I have no luggage,” she announced upon her arrival, though she brought plenty of baggage to make her stay a complete disaster — not to mention her presence at Downton put a big ol’ fork in the D.C.’s royal affair. “I shall never again receive an immoral proposition from a man,” she lamented to Isobel, who also broke off her engagement to Dickie Merton this week. “Was I so wrong to savor it?” (Dear Gareth Neame, please give Isobel and the D.C. a Golden Girls-style spinoff. Amen.) 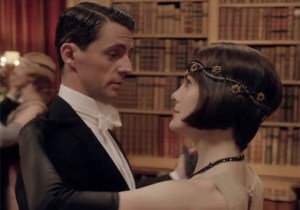 MARY’S MATCH | With Tony Gillingham and Charles Blake now merely distant, handsome memories, Lady Mary set her sights on a new side of beef wellington this week: Henry Talbot, played by Matthew Goode (aka The Good Wife’s Finn Polmar, who you were already totally into and now he’s got his British accent so forget about it). I’m not sure what the future holds for these two, and I know we’ve only seen them interact for this one episode, but I’m ready to label this a perfect match. Double wedding with Carson and Mrs. Hughes!

HEALTH SHARE | Following a brief flirtation with angina, Robert was given a (mostly) clean bill of health by his doctor — but more importantly, he told Edith that he knows and accepts the truth about Marigold. It was a really nice father-daughter moment for the two of them; it also helped me to realize that Robert’s the only Crawley who even cares about her. (She has always been, and will probably forever be, the Meg Griffin of this family.) That said, Robert made Edith promise to keep her secret in the family because “even in 1924, there might be people who are unpleasant.” I love that Robert said that as if people are supposed to get less unpleasant over time. (Take it from someone in 2015, buddy: People always get worse.) 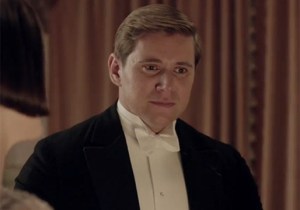 Odds and Ends:
* Tom’s farewell from Downton was honestly too gut-wrenching for me to even discuss at length. If you didn’t tear up while Mary held his hand in the nursery and spoke to Sybil’s ghost, then you’re the actual Tin Man.
* Spratt and Denker broth feud didn’t really hold my attention, though it’s clear they want to jump each other’s bones, which I can appreciate.
* Thomas appeared just as eager as I expected to have Andy join the staff at Downton. Hopefully he won’t turn out to be a total Jimmy, if you catch my drift.

Your thoughts on the Season 5 finale? Hopes for next year? Drop ’em in the comments section below.