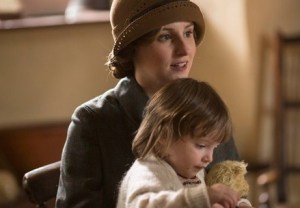 Is it getting hot at Downton Abbey, or is the building just on fire? (Oh, wait, it’s both.)

The PBS drama made its fiery return Sunday — this is why we can’t have nice things, Edith! — bringing new secrets to light that could jeopardize several of the Abbey’s most prominent residents.

Where do I even start?

LOVE GAMES | Let’s begin with Isobel Crawley, who’s finally being treated like the sex symbol true fans have always known her to be. (Once Dr. Clarkson shows interest, all the boys want to know what’s up, am I right?) She wasn’t really feeling her latest suitor, Dickie Merton — possibly because his name is Dickie, but who am I to judge? — so she turned to the Dowager Countess for a bit of assistance. Never one to pass up the opportunity to manipulate lesser humans, the D.C. used one of her classic sexy luncheons to redirect Dickie’s stinger towards another gorgeous flower, one Lady Shackleton. (Side note: Did you ever expect to see these two ladies enjoying a leisurely girl-talk stroll? Carson wasn’t kidding about this whole “flux” thing. The times, they are a-changing!) 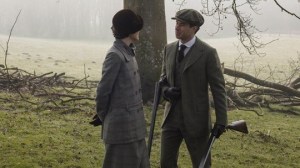 COLD AS ICE | Speaking of Downton’s most eligible bachelorettes, Lady Mary received a surprise (though not at all unwelcome) visit from Tony Gillingham, who’s still desperate to slip a ring on Mary’s frigid little finger. “Tony, I do love you in my own cold and unfeeling way,” she said, exhibiting a strange self-awareness I wasn’t sure she was capable of. Maybe she started watching the show? Either way, she clarified, “I intend to be as happy with my second husband as I was with my first.” (Here’s hoping she decides to include a “no driving down country roads” clause in her next prenup. Otherwise, what’s the point?) 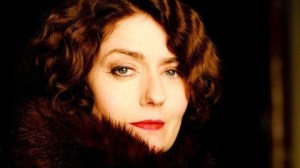 EMPLOYEE RELATIONS | But it wasn’t just the ladies of Downton being pursued this week, no sir; Jimmy was also visited by Lady Anstruther, whom I prefer to think of as the Ghost of Inappropriate Employers Past. She was so eager to get her mitts on his British buns that she invited herself to the Crawleys’ wedding anniversary party, slipped him a naughty note during dinner, then proceeded to ravage him while the damn house burned down. I know it takes two to tango, and Jimmy certainly seemed to be enjoying himself, but I hope Lady Anstruther is willing to help him out after screwing him (over) like that.

HOT FOR TEACHER? | While we’re talking about reunions, we should probably also discuss Tom and that know-nothing/know-everything school teacher Miss Bunting. Rose invited her to the Crawleys’ anniversary party, only for her to ruin Robert’s evening with her anti-war sentiments, which Isobel enthusiastically supported her right to share. (You just know Robert is itching to be like, “Isobel, why are you even here anymore?” #RIPMatthew)

BURNING LOVE | On a much sadder note, can we talk about Lady Edith? I mean, she’s always been the sad one, but watching her cry herself to sleep while thinking about Marigold was like emotional water boarding. (Someone needs to send her a couple of Murphy Brown DVDs so she can see that this whole “single parenting” thing can work, even without a laugh track.) While it’s comforting that Tim is willing to work out a better visiting deal, I don’t see that going too smoothly, considering Margie is already suspicious of her. Besides, isn’t it just a matter of time before Edith’s secret is blown wide open, anyway?

BAXTER’S BAX-TORY | And then there’s Phyllis Baxter, who — despite sharing a first name with my mother — is not to be trusted. Cora’s latest lady’s maid this week revealed her criminal past, namely that she stole jewelry from her previous employer and tried to pass it off as a burglary. Cora decided to keep Baxter on staff for now, mostly because she detested the way Thomas tried to use her past to blackmail her, but said she’s still making up her mind about Baxter’s future at the abbey. (Let’s be real, though… Considering her last lady’s maid forced Cora into a miscarriage, I’m thinking the threat of a few stolen necklaces really isn’t that bad.)

Now, for the finest quotes of the hour:

* “There’s nothing simpler than avoiding people you don’t like. Avoiding one’s friends, that’s the real test.” — the Dowager Countess, who would definitely hate Facebook if she was alive today.

* “Lady Edith chose to set fire to her room, but we’re fine.” — Lady Mary, who’s basically judge, jury and fire marshall all rolled into one.

Your thoughts on Downton‘s fifth season premiere? Drop ’em in the comments section below, then grade the episode and browse photos from the entire season.