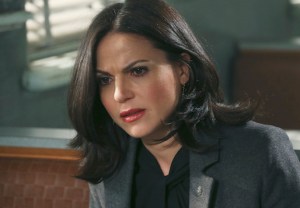 Once Upon a Time‘s Regina is on a mission, to find the storybook Author and in turn hopefully secure her own happy ending — whatever that might be for a famously evil queen.

Rumplestiltskin, though, has appropriated Operation Mongoose’s endgame for his own purposes, allying with the Queens of Darkness (Maleficent, Ursula and Cruella de Vil) to storm Storybrooke and hunt down the Author themselves.

With Season 4 of the ABC series resuming this Sunday at 8/7c, TVLine invited Lana Parrilla to preview Regina’s next move, assess her alliance with Emma, weigh in on Regina’s romantic sacrifice and more.

TVLINE | You’ve been busy this morning! In just the one hour that I was at the gym, I saw you on the TV twice.
Oh, yeah. It was a fun, fun morning, bouncing around [New York City]…. There’s nothing like GMA for a wake-up call. The energy there is so fun. I loved it.

TVLINE | Once Upon a Time resumes Season 4 this Sunday. What has Regina been up to since last we tuned in?
Well, a lot has happened, but she’s still on the hunt for this Author, and she’s paired up with Henry (played by Jared Gilmore) — which is adorable, in my eyes, because it’s so nice to see them kind of working in tandem. They’re kind of like little “partners in crime,” and they’ve developed a friendship, 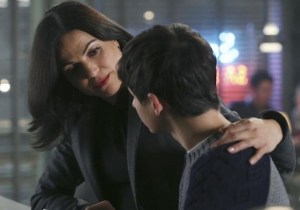 not just a mother/son relationship. And Emma (Jennifer Morrison), having learned of [Operation Mongoose], decides that she wants to be a part of it as well, so the three of them kind of work together to find this Author.

TVLINE | Last we saw, they had found the library with the blank books in it. What new clues do they have to go?
Regina gets this idea that the one person who may know more about this book than anyone else is Pinocchio, so she goes to Marco to speak to Pinocchio and see if he can tell her anything about this Author. We also have Eion Bailey returning — I can’t tell you how or when! – but that’s going to be very interesting.

TVLINE | There is a new promo that shows Emma and Regina in the street unleashing some magic at a Chernobog. Have they been honing their “team-up” skills, as far as working in tandem together?
Yeah. I think what they’ve realized is that they are stronger together — like the yin and yang, the light and dark, they go hand in hand, so working together they’re much more powerful than they are working alone.

TVLINE | In that clip, they kind of like give each other a nod like, “OK — let’s do this,” and then they let things fly. 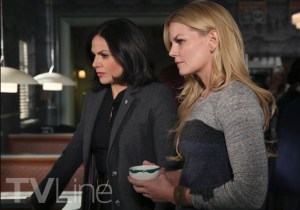 Would you say they are still frenemies, or are they full-on allies at this point?
I wouldn’t say they’re full-on allies at this point, but I think that they are still discovering what their relationship is. Obviously they’re both Henry’s mom, and they’re kind of forced to be in each other’s lives because of that, but I think what’s going to surprise them is actually how much they really do care for one another on a friendship level. And over time, what you’re going to really see is how close they’ve become, more so as family. Which is also how I see the Charmings at this stage, with Regina and Henry — they’re all a family of some sort. So, I think Regina and Emma are quite surprised by how close they have gotten over the year. And one thing I love is they ultimately have each other’s backs.

TVLINE | [Series creators] Adam and Eddy told me that what Rumpelstiltskin is up to with the Queens of Darkness will put them on a “collision course” with Regina and Operation Mongoose. Is that kind of the crux of the drama for the second half of the season?
Exactly. “Team Evil,” which is what we like to call them, bands together and they make their way into Storybrooke, so Emma and Regina are going to have to deal with this evil trio.

TVLINE | Of course, Maleficent, trapped beneath the library, has been vanquished twice before. Without saying how they do it, is it pretty convincing the way they bring that character back into the mix?
Yes. Absolutely. It’s very convincing. And it’s super cool. I saw a cut of it the other day, and I got chills throughout my entire body.

TVLINE | If I’m not a Dalmatian, why should I be afraid of this Cruella de Vil (Victoria Smurfit)?
Because she’s not a threat to just animals. She has an evil streak that runs deeper than we know, and you’ll see that, I believe, in Episode 18, when you get her backstory.

TVLINE | Are there any new kernels of information about Regina that we will learn through flashbacks?
In Episode 14 there’s a really great flashback with Regina and Mal, about how they met and first became friends. And we have something else coming up, down the road. In Episode 20, we have a surprise that you’ll see in a flashback.

TVLINE | Regina herself is “opportunistically evil” these days. What anymore brings out her biggest, baddest self? Is it threats to family…?
I think that when someone is being wronged, when something is unfair, when justice is needed in a specific moment, she’s learning to embrace her darkness. She’s learning how to use her powers differently than she did before. Before it was just to hurt, to manipulate, to terrorize, and now it’s to protect. And that’s the difference between Regina and some of the other heroes. They don’t want to kill, they don’t want to hurt anyone, but Regina is not afraid to kill or hurt someone if it’s for the right reason. If she can protect the greater good, and if that means ripping someone’s heart out, then she’ll do so.

TVLINE | Did you enjoy this past half-season, getting to finally play an actual romance for Regina? 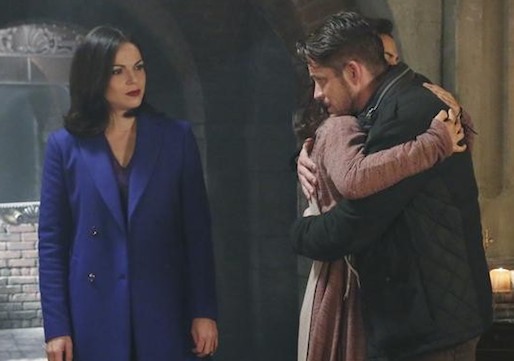 I did. It’s such a beautiful, vulnerable side that we haven’t seen in her — you know falling in love and seeing the hearts in her pupils….

TVLINE | To see her face light up….
Yeah, and genuinely smile without any sort of evil plan behind it. She’s feeling love in a way that she hasn’t felt in a very long time, if ever, because she’s an adult. Puppy love, with Daniel, her first love, is very different from what Robin is to her and her life now.

TVLINE | She was pretty magnanimous there, letting Robin head out into the real world with Marian. Do we file that under, “Better to have loved and lost than to have not loved at all”?
I think it was a heroic act, and a very selfless act as well. She really put herself on the backburner and did the right thing, saving Marian, even if it didn’t feel good in the moment. As hard as it was for Regina to make that decision, ultimately she did the right thing, and deep down inside she knows that she did, and so she’s very confident with her decision, even it if it means having a broken heart for however long. Saving the life of someone took precedent over her relationship with Robin, and ultimately it’s for Robin too, because [he and Marian] share a son. It’s a very complicated dynamic.

TVLINE | It really is, because Regina and Robin had to pursue this romance while Marian was frozen for a bit there – and some viewers took issue with that.
Yeah, but I think what a lot of people unfortunately had missed — because they called it adultery and all these things — was it’s really hard to look at that relationship and compare it real life, because it doesn’t work that way. First of all, someone doesn’t die and then come back 30 years later. The only example I can give is the movie Castaway, where Tom Hanks gets stranded, or, you know, a prisoner of war. Someone is pronounced dead because you haven’t heard from them and the wives think, “I guess my husband is gone, and I need to move on in my life.” That’s exactly what this was with Robin Hood. His wife had died 30 years ago, and he moved on, and the fact that she came back… is not a natural thing that would happen in our lives. It’s called “a television show,” and it’s a fantastical television show at that, and it all happened through magic.

TVLINE | Lastly, there’s another promo that suggests Emma might take a walk on the “dark side” at some point this season. Is that a case where Regina would swing into action and use her evil for good to prevent that?
I think Regina has learned a lot from her mistakes, and she doesn’t want to see Emma make the same mistakes, so she’s going to stand by her side and protect her as much as she possibly can to make sure she doesn’t cross over to the darkness.