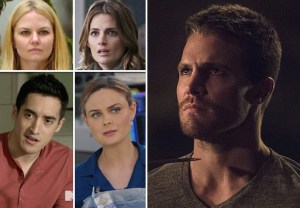 Is an Arrow heartbreaker ahead? Will Once Upon a Time lose a hero? Is Castle bracing for the end? Whose Bones birthday isn’t a happy one? Read on for answers to those questions plus teases from other shows.

Arrow scoop, please! –Deborah
Seeing as how we’re due for a couple of weeks of reruns, this Wednesday’s episode was “designed to be this crazy cliffhanger” — and boy is it! – “and have all this amazing stuff in it,” executive producer Andrew Kreisberg teases. Among the highlights for him: “Seeing what [Thea]’s willing to do, and what Oliver’s willing to do, for her soul,” and watching John Barrowman and Matt Nable finally share a scene. EP Marc Guggenheim, meanwhile, is “really excited for people to see the A.T.O.M. suit in its full glory,” especially as Ray takes his maiden flight. “This show is not Flash — we don’t traffic in these sort of visuals — so it’s a big deal for us to get this kind of character on the show, looking the way he does.” Bonus scoop: See if you can guess which character delivers this heartbreaker: “It’s hard to remember a time when I was actually in love with you.” Extreme bonus scoop: Our Vlada Gelman tells me the episode might break the Internet, twice.

Are we ever going to see Bones again? It has been off for quite a while and I really miss it. –Sandy
Bones resumes its season on March 26, with an episode that features an old tree with an icky-gooey dead human center. Sweets’ birthday looms large throughout the hour, a fact not lost on Avalon Harmonia – though at least one Jeffersonian staffer wants to hear none of her psychic ramblings. Also in the episode: Someone quits their job, and Brennan likens the sacrament of Holy Communion to Christine’s tea party with an imaginary friend.

Got anything for SVU? –Shavawn
Two spring episodes will revolve around a “wolf in sheep’s clothing” in the former of a charming and handsome onetime med student who is secretly a sadistic psycho who gets off on other peoples’ pain. As such, you can imagine the fun, fun, fun he has toying with the folks at SVU.

Please give me something on Forever! I am desperately hoping it comes back for a second season! –Eileen
If you’re among those wondering how Henry’s wife, Abigail, died, we went straight to the source — series star Ioan Gruffudd — for the answer. And it turns out… he doesn’t have one. “I always thought that something had happened where she not necessarily died in front of us, but maybe we had to part company to protect her or protect me or something,” he says. “Who knows if she’s still alive or still out there? I tend not to ask, because it’s best that I don’t know these things.”

I am seeking any info on Season 5 of Teen Wolf. –Lisa
For those who’ve been holding out hope for Danny’s return, there’s this consolation prize: Episode 4 of the new season, titled “Condition Terminal,” will introduce the recurring character of Corey, who in the course of being treated in an operating room for a strange, painful wound dishes on his boyfriend Lucas. (Guest star Lucas, meanwhile, is described as a shy young man who has become an aggressive problem at a club.)

Is there any way you can get any scoop about Once Upon a Time’s Belle? Her fans are dying for news. –Betsy
Your long wait for Belle goodness will end as soon as possible, because she gets the first line of dialogue — “Well, I see you still have your temper” — once the ABC drama returns to Storybrooke in Sunday’s Season 4B premiere. “And yes,” co-creator Adam Horowitz notes, “we haven’t forgotten that she’s still in possession of the Dark One’s dagger. That’s going to come into play pretty soon after our return as well.”

Any hint on the surprise related to Emma’s Once Upon a Time storyline for the second part of the season? –Frances
You probably got a taste for it from the new promo that debuted during the Oscars and hinted at Miss Swan’s dance with the dark side. As EP Horowitz explained at a Tuesday screening of the Season 4B opener, “One of the big themes for the second half of the season that we want to deal with is what makes someone a hero and what makes someone a villain — what the differences are and what the common ground is. Emma has spent a long time on the series being told she’s a savior and being told she’s a hero. Now she’s going to have to face that it’s not black-and-white.” UPDATE: Check out the Emma/Regina team-up here at the 18-second mark:
https://twitter.com/OnceABC/status/570312236452831232

Do you have any scoop on Hawaii Five-0‘s Kono? –clarlee
For Episode 23, the CBS drama is casting Kono’s “vibrant, beautiful” mother, who will be seen in flashback at age 30 offering her little girl invaluable advice about life.

Any scoop on Grimm? –Jen
Casting is underway for the guest-starring role of “Iron Hans,” a rugged fiftysomething ranch owner who hosts weekend retreats for Wesen fathers and sons who have lost contact with their warrior heritage. We’ll also meet his beautiful, twentysomething (and strong-willed) daughter, Maggie.

Any scoop can you reveal on Chicago P.D.? – Brendan
When Marina Squerciati mentioned that she and Patrick John Flueger were filming Burgess and Ruzek’s first big fight scene, we couldn’t help but ask what the squabble is about. “With Ruzek’s character, it’s probably generally a woman,” the actress replied. “I’m not going to tell you anything, but he’s a bit of a flirt.” But it’s something they can overcome, right?! “I hope so,” Squerciati says. “I love us together. But I wonder if they can get past it. We’ll see. If Burgess wants to get past it, it’s something she really has to understand about Ruzek’s character.”

What does it say for a potential Season 8 of Castle that they wrapped up the two major storylines (Bracken, 3XK)? And if this is indeed the last season, shouldn’t the writers already know so that they can properly wrap up the show? –Vaso
I revisited this hot topic with showrunner David Amann the other week — asking, At what point do they need to know which way the wind is blowing with regards to re-signing Nathan Fillion and Stana Katic and possibly locking a renewal? – and his response was this: “Obviously, we’re prepared for whatever comes along, and we’ll adjust as necessary. But we’re hopeful that the show will move forward. In the meantime, we’ll just make the best show that we can.”

Be honest: Is there any hope for Jane the Virgin‘s steadfast, remaining Jane/Michael ‘shippers? –Lianne
It’s kinda sorta possibly looking that way. As creator EP Jennie Urman said of upcoming episodes (resuming March 9), “There are a few moments where Michael helps Jane with certain things that he knows how to help her with only because of their history, and that starts to play a big part in their reconnection. At the same time, her relationship with Rafael gets stressed the more they start to think about the practicals of what their life will be and what their life will look like together.” (Hmm, now that I have re-read that, you can probably strike the “kinda sorta.”)

Real questions, real answers. If you need the Inside Line on a favorite show, email InsideLine@tvline.com!  (With reporting by Vlada Gelman and Kim Roots)