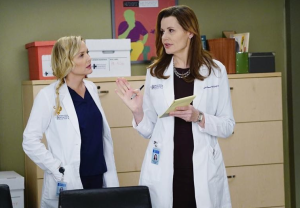 Is there a word for a bromance between women? If not, somebody needs to come up with one, stat, because in this week’s Grey’s Anatomy, it was on between Arizona and Herman (and “gal pals” just ain’t gonna cut it).

As the docs tried to plow through as many cases as they could before Nicole’s surgery, their growing closeness fascinated their colleagues almost as much as Amelia’s lectures on the daring procedure that she believed/hoped would eradicate Herman’s tumor.

And that was just the beginning of what happened in “Staring at the End.” Read on, and we’ll go over the rest…

TAKING STOCK OF A BOND | Early on, Herman appeared to be her usual snarky self. “Are you ever not chirpy?” she asked Arizona before turning down the case that Bailey wanted to add to their workload. But, as Nicole began undergoing radiation, her fear came to the fore – so much so that she first reached out to take Arizona’s hand and later declared that she wouldn’t continue that course of treatment. Period. (She and Arizona even got drunk and burned the radiation mask!)

Observing her ex and Herman yukking it up in the hospital cafeteria, Callie couldn’t help but be jealous — but not for the reason you might expect: She was ticked that Arizona had found a hurt-proof rebound for whom she didn’t even have to wax. “Oh my God,” Callie said, her own words ringing in her ears. “Am I seriously wishing for a sexless relationship where I don’t have to groom myself?” Weeks later, she brought up Herman to Arizona and expressed concern that Robbins had gotten so tight with someone who… well, might die soon.

TALK SHOW | Meanwhile, Amelia was so laser-focused on Herman’s head that she even strove to keep Owen at arm’s length. “You’re very hard to ignore,” she noted. And it was for the best that she avoided distractions, because even before she began her lectures, never mind the groundbreaking surgery that they were about, they were already a big deal. (Two other hospitals wanted her talks recorded, and Richard called them “a master class in neurosurgery.”)

At the dais, Amelia killed it, likening the tumor to a fat-cheeked baby fighting to survive and calling it “one of God’s masterpieces.” Behind the scenes, however, she was fraying, refusing to endure Derek’s “transcontinental smugness” by phoning him with a question and snapping at Stephanie. But rather than just be her mentor’s stress relief, Edwards snapped back that she idolized Amelia and challenged her to “be worthy of being believed in.”

If only Amelia’s doubts had stopped there… Before a lecture, she confessed to Owen that “I have this sick feeling that when I face that tumor, I will discover that I’m not just ‘the other Dr. Shepherd,’ I’m the wrong Dr. Shepherd” – a feeling that was exacerbated when Callie asked during a post-lecture Q&A whether maybe, just maybe Derek should be scrubbing in, too.

TIME’S UP | Though Herman was pissed when Arizona tricked her into seeing Bailey’s patient – the expectant widow of a patient she’d lost – a baby’s tragic demise left room for a new notecard on Nicole’s bulletin board, so she relented and took on the case. Unfortunately, just when the patient needed her most, Herman was being wheeled into surgery herself. After her vision began failing, she asked Amelia to do a new scan, and as feared, Shepherd told her, “It’s time.”

Arizona was understandably nervous about the prospect of tackling Bailey’s case on her own. But Herman – especially after seeing how inventive Robbins could be in the OR – assured her that she could handle it. Finally, it really was time: Herman had to be wheeled into surgery.

OK, your turn. What did you think of the episode? Herman’s gotta live, right? Pretty please? Hit the comments.