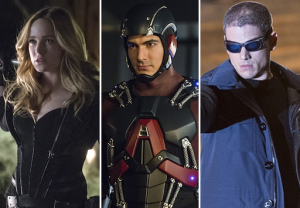 I don’t know where to begin with this one, so let’s just lay out what we know.

Simply said, as teased at the January Television Critics Association press tour, The CW is developing a series that would spin off recurring characters from Arrow and The Flash as some sort of DC Comics “superhero team-up” hour, our sister site Deadline reports.

What’s known: Arrow‘s Brandon Routh (who plays Ray/The A.T.O.M.) and Caity Lotz (formerly Sara/Canary) would star in the offshoot, as would The Flash‘s Wentworth Miller (Leonard Snart/Captain Cold) and Victor Garber (Dr. Martin Stein aka half of Firestorm).

Because Lotz’s character died on Arrow, it’s unclear what role, old/resurrected or new, she would play.

Also known: The project, Deadline says, would feature three “major” DC Comics characters that have never appeared on a TV series. (Live action presumably being the unsaid qualifier there, but I’m just spitballing.)

Lastly, known: Arrow/Flash EPs Greg Berlanti, Andrew Kreisberg and Marc Guggenheim are, of course, behind the project, which could skip the traditional pilot process and get ordered straight to series.

It’s a lot to process, so please, read the above at least twice, then hit the comments with your thoughts — and theories on the major DC characters this series would bring to life.