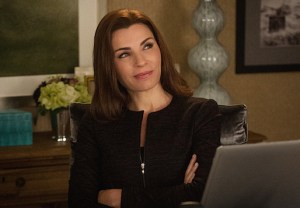 The Good Wife showrunners Robert and Michelle King will be the first to admit Season 6 has been “narratively chaotic” — but it’s all been by design.

Ever since the death of Josh Charles’ Will Gardner last spring, “you have everybody going in every direction at one time and things are coming unglued,” says Robert King. And there could be even more upheaval as the show returns this Sunday (9/8c on CBS) for the first of the season’s final 10 episodes.

TVLine caught up with the Kings to dish their exit plan for fan favorite Kalinda (in the wake of Archie Panjabi’s decision to exit the series), preview the ethical quandaries Alicia faces as she completes her campaign for State’s Attorney and check the romantic forecast for our titular protagonist.

TVLINE | Season 6 has been almost unsettlingly hectic — Alicia campaigning, the firm in flux, Cary in jail, Kalinda getting herself in danger on multiple levels. Has it been stressful as writers trying to juggle all those balls at the same time?
Robert King: It is very hard. TV shows, especially where you’re doing [22 episodes] a year, rely on status-quo. You have a certain structure that you can take off the shelf and go, “This is the structure we use week-to-week.” So, it’s been difficult knowing that each episode this season brings its own structure and its own struggles to find what the episode is about. It’s been fun, but I’ve got to tell you, it’s also a little like tightroping with out the net.
Michelle King: We never want characters to have forgotten what happened to them the episode before or three episodes before — they’re carrying the emotional reality as well as what’s happening with the plot. So, oftentimes we’re making lists in the writers’ room of things we don’t want to forget to answer, and then putting the lists up on the board.

TVLINE | Was this narrative chaos a deliberate decision, something you set out to do at the start of the season — or was it a more organic, week-to-week process?
Robert King: A deliberate decision. We wanted to start it in Alicia’s head — the idea that there was this really unsettled quality to her life, and a realization that she had put on a fake mask in court. And as you probably noticed, Alicia’s been arguing less and less in court. Obviously because of this campaign, but we structurally wanted someone who had lost her reason for living, who lost her direction in life, and it was all tied to Will’s death.

Then, we wanted it to grow out from there, like ripples in a pond, where everybody else is being influenced. You don’t know what the name of the firm is anymore because everybody is changing titles and moving from place to place. We’ve been in three law firms in a matter of six months. We really wanted to give the sense of things not having roots. Hopefully, the audience is there with us. A lot of shows change for change alone, but what we’re trying to do is follow the psychology of characters. Alicia does want stability. She doesn’t want to be drifting around and blowing on the wind. She’s the original good girl. That’s why I hope the audience will follow her to find where her moorings are. 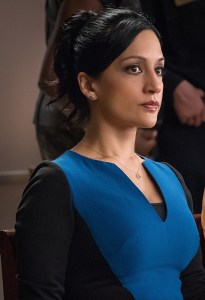 TVLINE | One thing we know is imminent is Archie Panjabi exiting the show by season’s end — and we’ve seen Kalinda make a huge misstep with altering email metadata evidence and getting really tied up in the life of drug kingpin Lemond Bishop — in both instances to to clear Cary’s name. Given that you killed off another major character in Josh Charles’ Will Gardner less than a year ago, are you taking death off the table as an exit strategy for Kalinda?
Michelle King: I would say that nothing is off the table and unfortunately, all we can say is that we are hoping to make it seem inevitable yet surprising.
Robert King: The job is a little more difficult this year. We had luck and very good CBS information control in that we were able to hide that Josh Charles was leaving the show [last season]. We don’t have that advantage this year. So, a lot of what we’re doing is playing with audience expectations of how [Kalinda’s exit] might happen. We’re only maybe seven or eight weeks ahead of the audience in what we’re shooting and writing, and what’s really good about that is you can take into account what their feelings are about episodes, what their feelings are about the arc of the season, and you can even vary it a little. We can’t turn water into wine, or black into white, but we can vary the expectations.

TVLINE | Will we have a Kalinda/Alicia scene before Archie Panjabi is gone for good? Some of our readers have observed it’s been a long time since those two characters interacted — even during the Cary crisis. Obviously, there’s been a chill between them since the revelation that Kalinda slept with Peter, but do you feel like some closure is necessary there?
Michelle King: I’m afraid all we can tell you again is, stay tuned.
Robert King: On that one, yes, that’s all we can say.

TVLINE | OK. Let’s talk about Alicia’s campaign for State’s Attorney. She went into it with this crusading idea of wanting to good in the world and wanting to knock Castro off his perch. But the longer it’s gone on, there have been more ethical compromises and quandaries in her way — like Bishop setting up her PAC, all the ideas being pushed by her campaign advisers. Are you going to keep exploring those themes in the back half of Season 6?
Robert King: There seems to be a theme of villains on TV now being the monsters. One of the best is [Breaking Bad‘s] Walter White. These antiheros of TV or cable, they actually make a choice, like a fork in the road appears to them and they choose to go down the dark path. What our show wants to explore is that those decisions aren’t made like a fork in the road. There’s a constant compromising of one’s values and one’s goodness. Every day, every hour of the day, there’s another compromise we all make. You could feel good if you make one decision a day that reminds you, “God, that’s why I got into this business.” Everything else is like a calculated attempt to just survive to the next minute. That’s what we wanted to explore with Alicia — someone who doesn’t choose to do bad, but someone who finds every day that there are these ethical challenges she didn’t even expect, that none of us expect. And she makes…maybe not the wrong choice, but the pragmatic choice.
Michelle King: What we like about Alicia Florrick is that she’s self-aware enough to recognize that she’s not always choosing the pure path, too.
Robert King: The campaign just gave us another way to explore that. There’s a beautiful book called Whatever It Takes, about the 1992 presidential campaign. It looks at all of these supposedly good men and women, who actually compromised their values. We wanted to see how Alicia could either thrive or be crushed by this process. 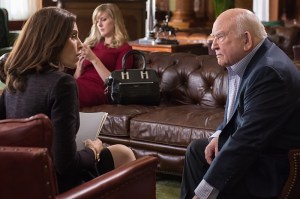 TVLINE | This week’s episode has Ed Asner playing a big-money donor who’s being courted by Alicia and her opponent Frank Prady. What can you tease?
Robert King: We’d always thought it was funny, the song and dances candidates have to go through to get the very, very deep-pocketed money men on their side, both in the Democratic and Republican fields. There is this thing called dark money, which is the name of the episode, where money is given in secret to a candidate’s PAC, and candidates go through a lot to get it. What we also liked was a character challenging [the idea] that a lot of liberals Democrats feel they’ve solved racism and homophobia on their side, and it’s the other side that’s wrong. We wanted Ed Asner’s character to be a little more old world, to burst the bubble of a lot of Democrat instincts about their own worthiness and purity. We have him back for one more episode after this week.
Michelle King: Ed Asner is really something. We love what he did with the part.

TVLINE | You talked at the start of the season about exploring Peter and Alicia as this power couple of political convenience. The last episode that aired in January, we saw Peter’s affair with Ramona end pretty abruptly, mostly due to political pressures. Alicia this year has sort of skirted around the edges of a relationship with Finn and impulsively kissed Johnny, but nothing more. I’m wondering is there any hope for true romantic happiness for either of the Florricks?
Robert King: I don’t think it’s impossible at all. What’s interesting is, something that might have been impossible in the second season or third season now seems within the realm of what Alicia’s choices are or what Peter’s choices are. They’re a power couple who lend each other the power that they need. Alicia is struggling with her own good-girlness. Even if she wanted to go off with someone, could she? There is something in her that struggles against that.

Alicia seems to be attracted to bad boys and yet, she herself tends towards wanting to do the right thing in a very conservative way of talking about “right.” There really is a struggle going on with her. There is something traditional in her nature — and it has to do with her mom bringing her up, her mom marrying a lot of men, and Alicia trying to get away from what her mom did.

TVLINE | I loved that scene earlier this season where Alicia and Finn are on the couch together — and it’s almost this Victorian setup… will they allow themselves to touch in any way. It was maybe the show’s sexiest scene all season.
Robert King: I know, and I’m glad you put it that way. The show can be sexy on a couple fronts, one of which is obviously with the minimal nudity and minimal sauciness. What’s even sexier is when someone really knows they shouldn’t be doing something, but they find themselves riding towards the precipice. Julianna Margulies and Matthew Goode are amazing with that kind of tension. We lost Matthew for one or two episodes because of obligations, I think for Downton Abbey, but he’s in the rest of the season, and he’s fantastic.