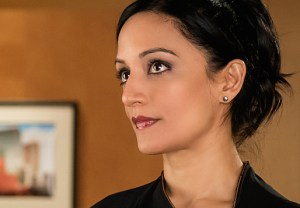 Kalinda’s boots apparently were made for walking.

Emmy winner Archie Panjabi will exit The Good Wife at the close of Season 6, our sister site Deadline reports, at which time her current pact with the acclaimed CBS series ends.

“Archie is an amazing actress who helped build Kalinda from the ground up as an enigmatic, powerful, and sexy character,” Good Wife creators Robert and Michelle King said in a statement. “It’s been a pleasure to write for her, and we’ll be sad to see her go; but we still have her for the rest of Season 6, so let’s not exhaust our good-byes yet.”

It’s no secret that Panjabi has had a strained working relationship with Good Wife leading lady Julianna Margulies — when was the last time Kalinda and Alicia breathed the same air? — but a source close to the show insists to TVLine that any alleged feud played no part in Panjabi’s decision to leave.

Next up for the actress: As part of a brand-new development/holding deal with 20th Century Fox TV, she will headline an unnamed drama pilot, to be filmed this spring and considered for the 2015-16 TV season.

Panjabi’s exit will mark the second consecutive season that The Good Wife will have sustained a major cast change, after male lead Josh Charles’ Will Gardner was written out of the show last spring.

Barring death, how would you write Kalinda out of the show?