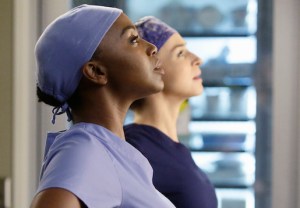 As the doctors of Grey’s Anatomy brace for one of the hospital’s most daring surgeries ever — removing Dr. Herman’s life-threatening brain tumor — anxieties are running as high as Dr. Amelia Shepherd’s confidence.

Dr. Stephanie Edwards, for one, is “nervous as hell,” her portrayer Jerrika Hinton admits, when the surgical resident is invited this Thursday (ABC, 8/7c) to scrub in on the cutting-edge procedure. “She’s nervous but still capable, and inspired,” the actress adds. “As much a supporting force as Stephanie is for Amelia, Amelia turns out to be that for Stephanie. She’s really inspirational.”

Hinton’s regard for new scene partner Caterina Scorsone is similarly high. “She is so generous, and giving,” she says of the Private Practice import. “She and I really value the process of rehearsal, so sneaking off into the corners to run scenes and find more ‘juice’ to bring out when the camera is on has been fantastic.”

Of course, the doctors the duo play are coming off a rocky-ish moment, when the happy outcome of a tumor removal that restored a man’s eyesight turned intense, as Amelia ripped the resident for hedging on the surgery. “That definitely cooled things, in terms of Stephanie’s excitement about getting to work with this phenomenally smart woman,” Hinton says. “But one of the key things in that lesson, in a way, was looking at the greater good, how many people this is going to benefit.”

Besides, “Just because you get chewed out once doesn’t mean you get to flounce off to your room and slam the door,” Hinton laughs. 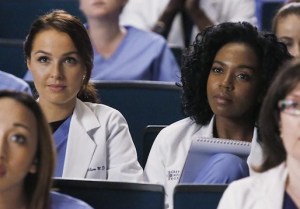 “You’ve still got work to do, so you need to throw on your big-girl panties!”

Meanwhile, Steph fields a bit of the green-eyed monster from fellow resident Jo (Camilla Luddington), who doesn’t get to be a part of the landmark procedure. “Jo is super jells,” Hinton smiles, “because Stephanie once again picks the right horse, as Dr. Herman would say. But you won’t really see that interfere with their friendship, since the point of being a resident is this rivalry.”

The medical drama’s subsequent episode, airing March 5, revolves around Herman’s (Geena Davis) actual surgery, which even the highly skilled Amelia will come to realize is far more difficult than she anticipated. Will Stephanie, scrubbing in at her mentor’s side, rise to the occasion and help right the boat? “You will see Stephanie step up during a pivotal moment,” Hinton allows, 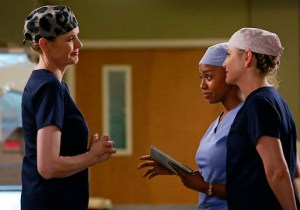 “and yet that moment is not the apex of the surgery. That moment won’t be the highest point of tension.”

Hinton wouldn’t dare spill the biggest twist and eventual outcome, but offers this much: “You won’t see the ending coming. The end of the surgery you think will happen is not the ending we give you.” Beyond that, the actress will only say that the operation “inspires a lot of emotions, and many of them are at odds with each other.”

Hinton herself, meanwhile, is not at all anxious but sitting back and relishing the abundance of recent developments for her character, who first arrived on the scene in Season 9, then was made a series regular for Season 10.

“When you start reading the scripts and go, ‘Oh, more Stephanie…. More Stephanie…. Oh, that’s new information,'” that’s really great,” she effuses. “I feel like she’s finally finding her footing and becoming grounded in the world of Grey+Sloan!”