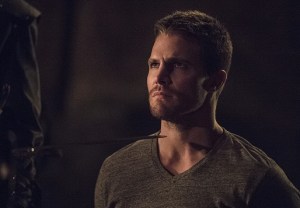 On Wednesday night’s episode of Arrow, Oliver Queen once again escaped death — thanks, this time, to a twist more surprising than magical herbs and snow.

Rather than killing Queen, Ra’s al Ghul announced that he wanted the archer to replace him as the leader of the League of Assassins. (Sorry, Nyssa.)

Meanwhile, another hero took flight as Ray finally got the A.T.O.M. exosuit working — after a night of passion with Felicity!

Below, executive producers Andrew Kreisberg and Marc Guggenheim discuss the big choice ahead for Oliver, as well as the other characters’ reactions to the news of Ra’s proposal. They also weigh in on Felicity’s decision to move on and Oliver’s reaction to Starling City’s newest crimefighter.

THE OFFER | The heading of this paragraph also is the title of the next episode, in which “Oliver is completely — as hopefully the audience is — taken aback, ’cause he was not expecting” Ra’s al Ghul’s overture, Kreisberg previews. “It was something that [executive producer] Greg [Berlanti] and Marc and I talked about: It was important to have a different villain this year and somebody who is going to be doing something completely different.” And that Ra’s most certainly did, going from “giant, malevolent force” to presenting “the keys to the kingdom to our hero.” How Oliver and everyone else will react to the proposition, and how he’ll ultimately answer, “makes up the bulk of the next run of episodes,” the EP notes, adding that the League is now “a different kind of threat, because they’re asking him to join up. [But] as Malcolm tells him in a subsequent episode, [Ra’s is] not really asking.” 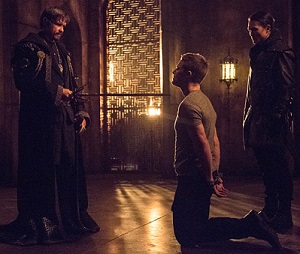 But can Oliver even step into the murderous leadership role, given his humanity? “Ra’s has an interesting perspective on that question, which you’ll get in the first act” of the next episode, Guggenheim replies. “One of the things we reveal in [Episode] 320 is where the name The League of Assassins came from and what it means to be an ‘assassin.’ If you’re a historian, you know it has a different meaning than what it’s become in the modern day.”

HEIR BECOMES HER | One person, in particular, will have very strong feelings about Ra’s offer. “Nyssa is the Heir to the Demon, so you can imagine how she feels when she finds out that what she considered to be her birthright is being handed to Oliver,” Kreisberg teases. Did the diss from daddy come because of her close relationship with a certain Lance sister? “There’s a scene in [Episode 16] between Nyssa and Ra’s that definitely addresses that,” Guggenheim says. “From Nyssa’s perspective, it has everything to do with Sara. From Ra’s perspective? Maybe, maybe not.” Regardless of the answer, Ra’s decision will send his lost daughter “on a different trajectory where she’s seeing what kindness looks like for the first time, and she’s seeing what normal people look like for the first time,” Kreisberg says.

NEW BED BUDDIES | Olicity fans, still in tears over Felicity sleeping with her boss, Ray Palmer? Perhaps these words from Kreisberg will offer some solace as to why the tech whiz has moved on: “Part of the fun of watching couples on television is keeping them apart and watching how other people come in and out of their lives,” the EP says. “For right now, Oliver has decided that [he] can’t do this, and Felicity’s not just going to sit around waiting for him. She’s probably the most healthy of all of them. He’s the one shutting himself down, emotionally, when he has this amazing person who’s basically offering him hope, guidance, friendship and love and everything. He doesn’t feel he deserves it and doesn’t feel that’s what’s best for her, whether she agrees with it or not.” On the other end of the spectrum, but not so far apart from Oliver, is Ray, who’s “had a tragedy and he’s trying to do right by it, but he’s opening his heart to her. And he’s Brandon Routh. How can you blame her?” Kreisberg adds.

While we don’t know yet if Oliver will learn about Felicity’s new beau, he will have a reaction to the new superhero in town. Ray will “go about things in a very different way than the Arrow does,” Guggenheim reveals. “And he’s not a part of Team Arrow. Right now, he’s just a very smart guy in a very, very powerful suit. Oliver’s definitely going to have an opinion, and the first instance of that will be in Episode 317.”

ANOTHER QUEEN SPARED | Although Thea’s guilt and regret led to her “essentially attempting suicide by Nyssa” at the end of the hour, the next episode finds the young Queen looking “for closure in another way,” Guggenheim teases.

Arrow fans, do you think Oliver will accept Ra’s offer? Was Ray’s maiden voyage as Atom super? And are you looking forward to more of Nyssa’s journey? Sound off in the comments!