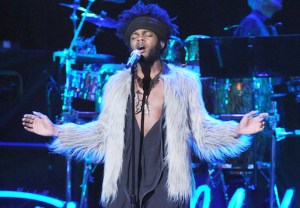 No disrespect to the incomparable Ryan Seacrest, but perhaps for one week only, American Idol should’ve replaced him with an auctioneer?

Tonight’s one-hour telecast — which featured Season 14’s Top 12 guys performing for only eight available slots next Wednesday — was paced so frenetically it made Usain Bolt look like a three-legged tortoise.

Actually, it might’ve been better had Auntie Trish (AKA exec producer Trish Kinane — read my juicy Q&A with her here) simply cut the fat from the telecast — and no, I’m not referring to 15-year-old Daniel Seavey, despite the PTS-Ewww I felt after hearing him sing the line “Scooch a little closer dear, I’ll nibble your ear.”

With so much to pack in to such a limited amount of airtime, why not eliminate the judges’ critiques? I mean, J.Lo, Harry and Keith’s comments were so rushed — and so boiled-down in this pre-taped environment — that they actually proved less helpful than the Aussie judges’ mid-performance hair flips or Jenny From the Block’s “mmm-hmm” face.

Ah well… what do I know? I just sit here in my Old Navy sweats — they’re new, and they’re spectacular(ly comfortable), in case you were wondering — and make snarky Twitter comments. Professionally speaking, I am one-step above that dude in his mother’s basement who types in PERMANENT CAPS LOCK and ruins every comments section on the Internet. GAH! 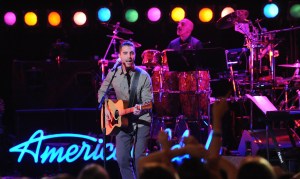 Instead of succumbing to such a terrible fate, let me weigh in now with letter grades for each of the night’s performances — along with succinct five-word opinions (gotta keep it pithy — since I also recap Empire).

Your turn. Who’d you love from the Top 12 guys? Who should be and who will be at risk? Take our poll below, then sound off in the comments!