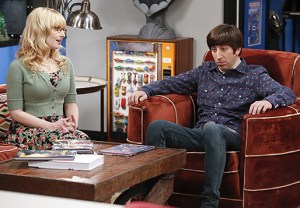 Though she was never seen on camera, The Big Bang Theory‘s Mrs. Wolowitz has arguably played as big a role on the show as Leonard, Sheldon and Penny.

Often the butt of obesity jokes — usually made, in poor taste, by son Howard — and prone to getting a little too overprotective of her only child, Mrs. Wolowitz has been recognizable to fans of the CBS comedy through only her voice, as she shouted to Howard from other rooms of her house.

Sadly, that powerful voice was silenced last November after Carol Ann Susi — the actress who portrayed Mrs. Wolowitz — lost her short battle with an aggressive form of cancer.

Thursday’s episode of The Big Bang Theory paid tribute to Susi, with a heartbreaking subplot in which Howard’s mother passes away while on vacation in Florida. After Howard spends most of the half-hour angry with Stuart for putting Mrs. Wolowitz’s furniture in his new-and-improved comic book store, Howard receives a devastating phone call from his aunt, explaining that Mrs. Wolowitz settled in for a nap on her trip, and didn’t wake up.

Following the tragic news, some of the episode’s most comforting words come, surprisingly, from Sheldon, who assures his friend: “When I lost my own father, I didn’t have any friends to help me through it. You do.”

Later, while Bernadette and Howard head to the airport, the rest of the gang reminisces on their fondest memories of Mrs. Wolowitz… and some memories of which they weren’t so fond. “I didn’t care for her yelling,” Sheldon admits. “But now that I’m not going to hear it again, I’m sad.”

With that, Leonard leads a sweet toast to the dearly departed Mrs. Wolowitz — and, by extension, the woman who voiced her: “To Mrs. Wolowitz, a loving mother to all of us. We’ll miss you.”

Though the episode ends on a somber note, this week’s installment wasn’t without its lighter moments. Most notably, Raj and Leonard spot former Firefly captain Nathan Fillion at a restaurant… though he tries to convince them they’ve got the wrong guy. (But hey, Raj and Leonard get a selfie with Fillion out of it, so I’d put this one in the win column.)

What did you think of The Big Bang Theory‘s tribute to Carol Ann Susi? Hit the comments with your thoughts on the episode.