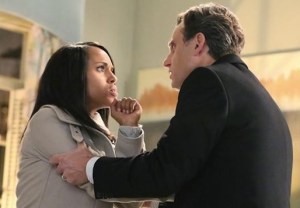 This week on ABC’s Scandal, after the initial deal for Olivia fell through, a second auction was held, with the Gladiators furiously in on the bidding. In the end, who claimed dibs on the most wanted woman? And who lost her perhaps forever?

Harken back to a recent time when Darby Stanchfield, who plays Abby, told TVLine that within these first four Season 4B episodes, there would be “the most freakin’ hugest surprise,” one that longtime fans — aka the OGs or original Gladiators — “are going to freak out over.”

And sure enough, there he stood. (Props to TVLine reader Wheelz for predicting it first.)

Because after Olivia craftily torpedoed the trade-off with Iran, by using her Farsi fluency to make both sides distrusting of the other, she went back on the block. This time, Huck, Quinn and Jake bid fast and furious, scaring even the likes of ISIS (!) away from the table. When bidding closed, “Marie Wallace” was tied with the Russians — and since Olivia has the worst poker face at the worst times, the lead goon decided to go with the Russkies.

Abby meanwhile gleaned that Cyrus had (begrudgingly, after having a most entertaining daydream about chewing out Fitz) allied with the CIA to have the threat to President Grant — we know her as Olivia — terminated, by lobbing a missile at her after she is handed to the Russians. Thankfully, Cyrus 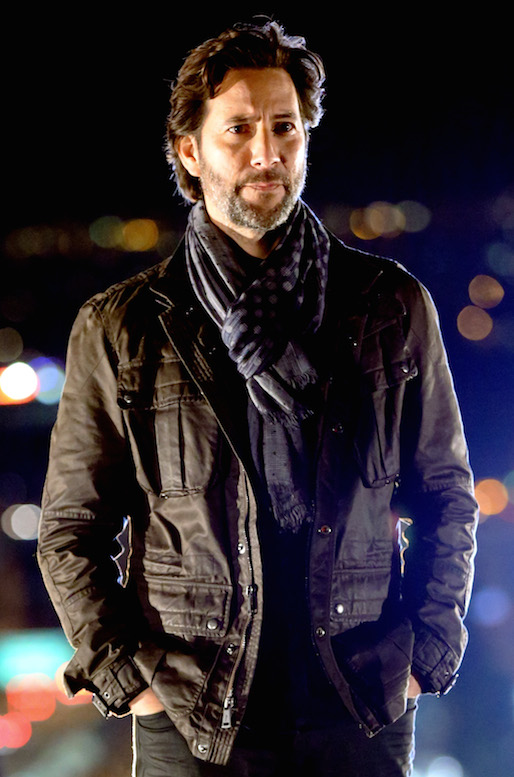 despite his age has super peepers, because even on the grainy sat feed, he recognized the man representing the winning bidder.

Stephen freakin’ Finch (played by Season 1 cast member Henry Ian Cusick, now of The 100). Tracked down and summoned to the rescue by desperate Abby, who knew he was hanging in St. Petersburg these days.

Liv of course is glad to see Stephen, but first grabs one of his guys’ guns and puts a bullet into her tormenter. Later at a helipad, the onetime OPA colleagues had a warmer moment, where she even offered him his old office back. Stephen though declined, saying he’s happy where he is now. He then notes, “You saved me, and I never thought I.d have the chance to return the favor” — but in the end he did get that chance.

Once back home at her apartment, reunited with Fitz… things were not warm. They were heated — and not in that good, “one minute” kind of way.

Liv launches into a Shondalogue about all that she has done for him to support him, to protect him, to establish and shore up his forever-delicate presidency, and he then tarnishes it all by declaring war and putting soldiers’ lives at risk for her? For one person?! In short, Olivia is borderline disgusted, certainly disappointed, to the point that she lobs at him the ring Huck had just returned to her possession.

Yeesh, I get cheesed off when a gal doesn’t return my text quick enough. Fitz gets the brush-off after declaring war for his lady! #Perspective

* When Andrew made it clear to Mellie that if he is fated to never be POTUS, he’ll make damn she won’t ever claim the office either, the First Lady urged Elizabeth to “show some solidarity, sister” and silence Andrew. So Lizzie Bear pays Huck a visit and tasks her onetime torturer to “make him hurt.” One syringe and three rolls of Saran Wrap later, Andrew has stroked out, incapable of tellin’ anyone anything.

* Also, at one point when the Gladiators are desperate to waylay the Russian hand-off, Maya points Jake to Rowan’s hideaway at a lake, but that proves to be just a red herring for us, the viewers.

What did you think of the resolution of Olivia’s kidnapping/auction?