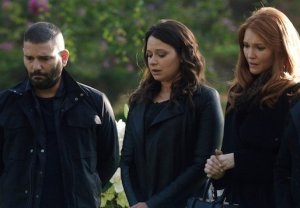 Olivia Pope’s disappearance may give birth to even bigger surprises when Scandal resumes Season 4 on Jan. 29.

When last we tuned into the ABC drama, Olivia (played by Kerry Washington) had vanished from her apartment in the midst of a romantic rendezvous with Jake, leaving behind only a spilled glass of wine — “and on a white sofa that you know was super-expensive,” cast member Katie Lowes notes with a laugh. “So yeah, this is a Code Red, I would say.”

“Olivia’s gone missing and we address it head on,” picking up right where the midseason finale left off,  Darby Stanchfield adds. And that means all hands on deck, to crack one of OPA’s strangest cases ever.

“As you’ve seen in the first half of this season, Quinn has taken a step up as far as running things at OPA,” Lowes reminds, “so when Olivia goes missing, you can assume that she is going to put all her effort into the case.” In addition, White House press secretary Abby “has a bit of a gladiating moment. She gets to dabble in the OPA world,” Stanchfield shares. “It was fun for me and it’s going to be fun for the fans.”

Also fun, for longtime viewers, is the prospect of having the socks knocked off by a twist of unusual size.

As Stanchfield warns, “There is the most freakin’ hugest surprise that happens in the next four episodes that the original Gladiators” — meaning, viewers who have been with the show since Season 1 — “are going to freak out over. The only clue I can give you is that the fans of the first season are going to lose their minds.”

For Lowes, the aforementioned twist “was as surprising to me as that ‘Dad?’ moment at the end of Season 2,” when we learned that Command aka Rowan is Olivia’s father. “That’s how big of a shocker you guys have coming.”

Echoing Stanchfield’s words, Lowes adds, “It’s a real surprise for the original Gladiators, the people who have been here since the beginning. It’s a real OG situation.”

Original Gladiators, assemble and hit the Comments with your theories on the surprise to come.